Not a great deal going on with the Fury just now, two main reasons, one we had a family holiday in Lanzerote, & two I've been working away from home.

On the last day of the holiday we rented some Segways - great fun & fascinating things - absolutely no practical application in the real world of course, but very clever.

The journey home wasn't the best, first daughter No.1 disappeared to get a drink for 15 MINUTES just as the coach was due, fortunately the coach was late, but the same daughter returned with two cups of lemonade, & stood one on an upright suitcase (I'm guessing you can tell what's coming next) in spite on warnings, she then knocked it all over the suitcase & my cabin baggage (that's my bag, not my wife). We arrived at the airport just about last & had to queue for an hour to check in. Lanzerote has "environmentally friendly air conditioning" a sign said - I think that just means it was turned off. Once inside the departure lounge, things got worse. Tempers were frayed at this stage, so when I offered daughters & friend 30 euro for some food & was ignored, then when I offered it again somewhat more pointedly & was told to "shut up & go away" I'm afraid I lost the plot. The red mist descended & I found myself thinking "I'm going to hit her. I'm going to hit her in a MacDonald's queue in a foreign departure lounge & be arrested". Fortunately my iron will prevailed, I walked away & stayed walked away right until we got home at 02:00 the following day. Then I got up & went to Chester for the rest of the week.

Perhaps not surprisingly there was "a bit of an atmosphere" when I returned. 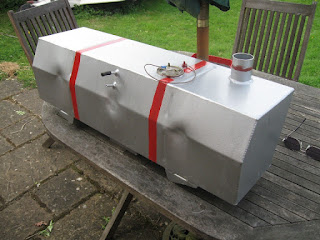 Meanwhile, back at the car, I've spent odd moments cutting up the old bonnet & taking the "hump" to Neil Dean (who needs it as a temporary fix for his zetec swap), painting the new fuel tank & getting it ready for fitting. But, I hear you cry, why have you painted racing stripes on it? Well, because of the close fitting rear body, it's not possible to lift the tank into position & then fit the straps, so I've made the straps fit right round the tank, so it lifts as an assembly into position, so the red stripes show the position the straps need to go in to align with the holes in the chassis. 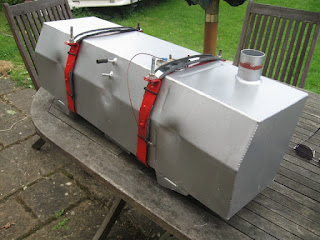 In this seemingly identical photo the straps are fitted, confusingly they're also painted red - the paint was open & I didn't want to wash the brush again. Having got the tank ready to go up I extended the wires to the sender & tested the travel. There had always been "an issue" when the tank was full, the gauge showed 3/4, when it was 1/2 full the gauge showed empty. Well by rocking the tank to & fro, I think it will show almost full when it's completely full & empty when it's almost empty. At least this time I'll be able to take the tank out & adjust it.