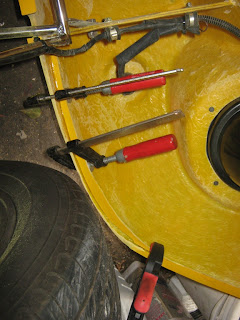 So, repairs rumble on at a snail's pace. over the weekend I trimmed the off side front wheel arch to clear the front wheel at all angles of steering, then bonded the lump I cut off back onto the bonnet further forward to stiffen it back up. You can just see it clamped in position while the adhesive cures. I wasn't having much of a weekend, family troubles & generally feeling down, so that was all I did.

But today, a couple of packages arrived at work for me which contained a couple of M8 rod ends, a fuel tank vent valve, & a new front No. plate. 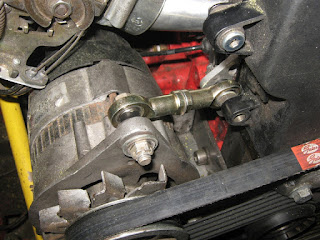 The rod ends were to make a new alternator adjuster, the engine side bracket for the old one having fatigued. I decided to go to M8 from M6, a spur on the moment decision designed to make the joints wider & so reduce the offset. What I failed to take into account was that it also made them longer, so as you can see from the photo, there is no gap between the joints. But fortunately they are just the right length. we'll see if it lasts better this time. It's the gold thing in the middle of the photo. 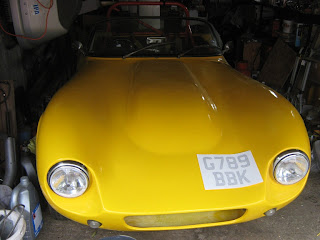 One last thing I've done it to tape the new No. plate into position. This time round I've bought a "square" one, which I'm intending to offset to the near side to try to reduce the "mustachioed" look, here's what it looks like.
Posted by BlatterBeast at 17:45