Having spent a LOT of time on the front of the car, today I worked on the back - they say variety is the spice of life. 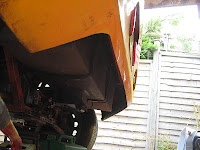 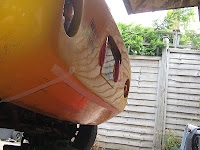 The plastic fuel tank's been weeping for a while, so it was time to put it out of it's misery, the problem being it's fixed in place by the the rear bodywork, so the only solution was to cut away the rear valance. In fact only a small amount needs to be cut, But I decided to take a "let the dog see the rabbit" approach, as you can see from the before & after photos. The old tank came out as did a whole load of piping, I have a vent valve for the new tank, so the two yards of vent pipe won't be needed. Some wiring got re-arranged & I took the fuel level sender out of the old tank & cut a hole to suit it in the new tank. I also re-bent the old tank straps. 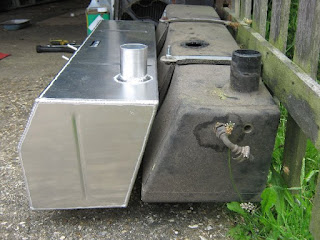 So after a bit of jiggery-pokery, the new tank is temporarily in the car. It's been in & out so often it's now quite adept at the Hokey-Cokey, the main problem being some bolts I'd not taken account of in my design, the tank needed a little "dressing" with a bossing mallet to create three scollops (sounds so much better than "big dents") to clear them.
I still need to move the pump to the back, remove the swirl pot & another load now unecessary piping, before finally fitting the tank & making some means of re-attaching the 8" x 3ft chunk I've removed & making it strong enough. 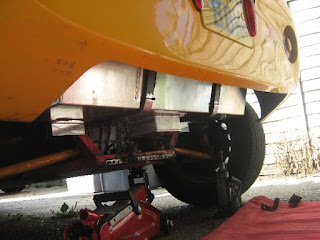