Tanks - But No Thanks

I took the Stylus out this morning, partly to check the ground clearance with the new shorter panhard rod bracket. Imagine my disappointment when there was a hearty thump even before I left the estate. In fact it wasn't the panhard rod bracket this time, the fuel tank had hit the ground coming off a speed hump - EEEK!

The tank has been a bone of contention since I got the car for a number of reasons:-

It hangs below the rear valence.

It's vulnerable in an accident.

It's WAY too low.

It's made of stainless so it's heavy

On that last point - I have the drawing the tank was manufactured to among the paperwork that came with the car, it's around 8 1/2 gal & there's a note pointing to the bottom saying "2mm" & another pointing to the top saying "3mm", which I'm assuming is the material thickness. So having drawn it on CAD, I can say it weighs about 15kg! 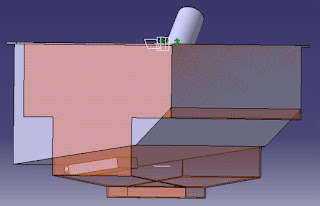 I've drawn up a replacement tank which fits in the same space, to the same brackets & is slightly larger at 8.9gal. It doesn't show under the valence, worn't hit the ground, has no vertical faces at the back (so if it's hit it tends to lift the car rather than crush) will have piping & brackets to attach a high pressure pump, so I can do away with the low pressure pump AND the swirl pot & it should be less than 4kg, saving 11kg with the LP pump & swirl pot saving at least another 3kg.

The brownish orange colour is the current tank, the grey is the initial idea for the one I'm working on.

All the measuring had to be done on the drive because the Quantum is in the garage waiting either for the starter to be mended or replaced. The starter has been a constant irritation, it works just fine as long as the engine's cold, if the car has been moving it'll start OK, but if the engine was idling when it stopped, so the temperature has climbed a little, the starter goes wuh ........... wuh ..........wuh as if the batteries flat & the engine won't start. Open the bonnet & allow it to cool for about a minute & turn the key again & it starts. Yes it's weird - AND EXTREMELY ANNOYING. So it's gone into the Burghfield starter & alternator centre for a good looking at & while it's in the garage I'm also looking at the last of it's problems, the permanently energised relay that drains the battery & the rattle behind the dash.