When I got home from the car show I decided to look into why the handbrake is PANTS.

Part of the reason I know is the rear disc conversion - they have a reputation. When I got under the car I found that the "balancer" that should ensure the load is equal on both cables to the rear wheels was right at one end, so one side was getting most of the pull, I put in some washers to try to even it up, but it was still rubbish. 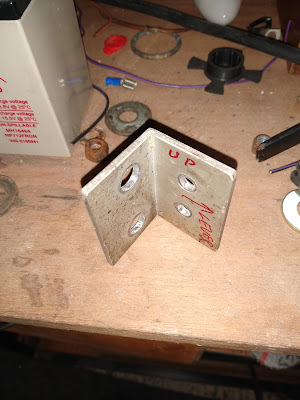 Then I looked at the bracket that holds the cables - when you pull on the handbrake you're pulling against this, so it needs to be rigid so all that pull goes into the cable inners. It looked like this:-

Not terribly substantial then, just a 3mm thick aluminium angle bolted to the sheet metal trans tunnel, when the lever was pulled, this bracket deflected & I suspect the transmission tunnel panel did as well.

I rummaged around the garage & found a much stronger piece of steel angle with a gusset at one end (it was actually bolted to the Stylus & serving no purpose when I bought it), I cut the other end off & welded it on to make another gusset & after quite a faff, bolted it back to the car, using one of the legs of the old bracket as a back-up plate on the outside of the tunnel. The handbrake is still pretty lousy, but better.

Assuming it passes the MoT like this I'll look at it again over the winter & stiffen up the trans tunnel. 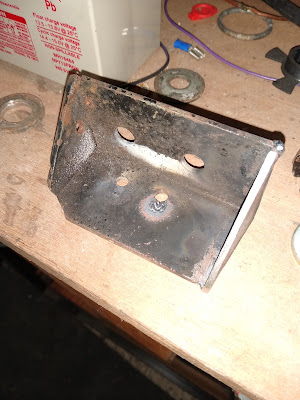 It's not pretty, but it is beefier - but the thing it bolts to needs to be as well.