Unlike Vlad P, my tank is not stalled - well, it is a bit. 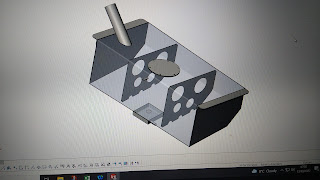 I ordered all the metal from Metals4U, who promised to cut it all to size & deliver it free, which they duly did, except that what I got was all the sheet metal, none of the extrusions. However, the extrusions should be with me on Monday. So tomorrow I have a day of tin-bashing, making up the main shell, the ends, the baffles & the sump, so that the lovely Grace can weld them all together for me.

the current tank has a number of "features" to whit:-

It's too deep - deep enough to hit the ground on speed humps.

It's tee shaped - which means you think you're doing really well for fuel until the level drops to the narrow bit, which is 1/2 the gauge, but only 1/4 of the capacity.

It's heavy - I have the drawing it was made to & there's a note pointing to the bottom skin saying "2mm" & another pointing to the upper skin saying "3mm", if that's the metal thickness (it's stainless steel) then the tank weighs about 15kg - my new one will weigh about 4.

The filler is in the boot, in spite of the car having an aero filler cap on the rear wing.

The return line is via a large brass fitting on the access panel in the boot, you may remember I had to make a domed cover when I first had the car. With the new tank it'll just be flat.

Also on the jobs list for this weekend is the side screens, the second lot of lift-off hinges arrived, so this PM I've mostly fitted the driver's side screen, I just need to attach the ball joint & make up the deflectors that'll be fitted most of the time.

In other news I put on the Quantum's new starter, which promptly failed (yes, I was a little cross). I took it back to Burghfield Starter & Alternator where the nice man had it in bits & repaired it, so now the stereo is in the car, the starter works & I've started advertising it for sale.