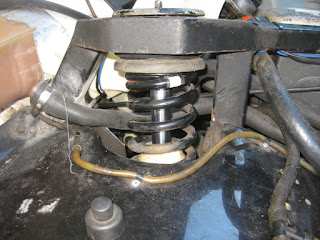 After the dissapointment of not finishing a number of jobs last weekend, I have been more sucessful in the intervening days.

My brother made the spacers I needed for the front struts & I got one fitted after picking them up on Monday & found time to swap the cig lighter sockets on the dash for 12v ones which are slightly smaller so the plugs don't keep falling out. Tuesday the carb refurbish kit arrived so I re-built that, though some gorilla before me had stripped no fewer than THREE of the six threads  holding the carb top on. I had some studding, so araldited lengths of that into the remains of the threads & held the top down (gently) with the three remaining screws & three nuts. It started & having done the other strut, I took it for a test drive, but the steering wheel was off by about 10deg which was annoying. 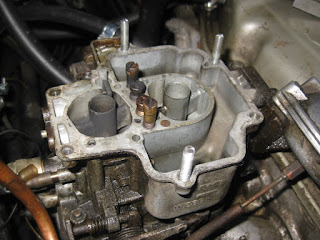 Since then I've slackened the strut bolts off, pushed the front wheel out with a jack between the gearbox & the hub carrier & torqued them up again & the steering wheel now points straight ahead & has more "feel". So that's another fix.