We shared out hotel with members of the MG owner’s club & I’m afraid this morning we rather disgraced ourselves.

Firstly Dave’s starter motor wouldn’t turn fast enough to fire the engine – something it’s done before apparently, so we bump started his car, then I sat in mine, pushed the starter & the battery was flat, so for the first time I deployed the jump pack & it worked perfectly.

Having got the reluctant cars running, we headed out of town round Horseshoe Pass & headed for England, crossing the border at Threapwood.

After about 80 miles there was a stop at “The Tin Hut Coffee Tavern” which is in – a tin hut. Quite a nice tin hut & it has a big car park, Matt was waiting for us having driven up that morning. After a little while Linda arrived, having sent a text saying she would try not to sail straight past – she sailed straight past. But just beyond the hut, the road was closed, so she came back. 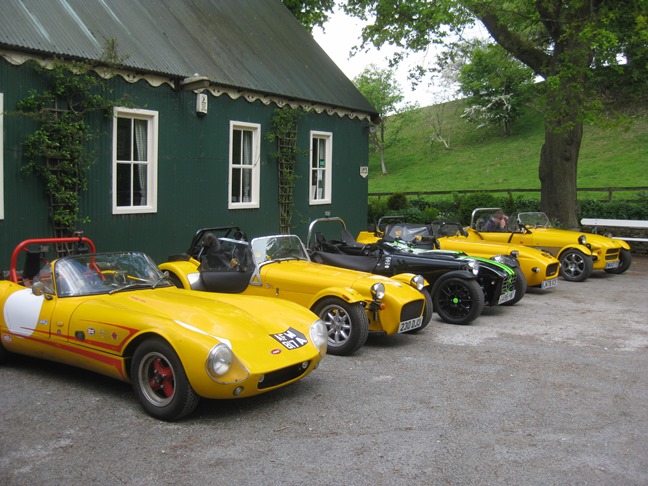 Suitably refreshed, we headed out – avoiding the closed road & also avoiding all the major towns, motorways & traffic in the Manchester area. At one point we passed the Swizzle Lolly Factory – no sign of a factory shop though which is surely an omission on their part.

Up on the moors we went over a dam & turned left. T.Y.R.E. insisted that you can only turn right, but I’d followed the left-hand road on streetview & it looked OK & so it turned out.

After another couple of miles we be passed through the outskirts of Upperthong (there’s also a Netherthong), then through a town called “Friendly”. Then as I waited for traffic lights in Hebden Bridge, I pulled on the handbrake, there was a “clack” & the lever moved right to the end of its’ travel. I assumed the cable had jumped a pulley wheel & drove off – until the next light when the brake pedal went down to the firewall!

I nursed the car round some small, steep streets until we found what appeared to be a level(ish) car park the & four of us that were together at that point parked up - & were told in no uncertain terms that it was NOT a public car park, but a school car park. One of our number explained that we had a safety issue & would not be leaving the cars there.

I retrieved the jack from its’ hidey hole in the pod, jacked up the back & proved that the driver’s side rear wheel had no braking, so I jacked just that side up & we took off the wheel, took off the brake drum & the self-adjuster was in several pieces. The clip that retains the pin that holds it together had failed. So all the springs had to come off, the upper shoe came off, we re-fitted the pin & retained it with a washer from my spares bag & an R-clip from Matt’s, re-built the brake, adjusted it, put the wheel back on & drove off!

I was a bit careful for a while, but the brakes were fine. Lucky it didn’t come apart while I was descending one of the many steep hairpinned hills though.

After that excitement, we suddenly found ourselves behind another of our party, then shortly after that we passed the sixth waiting by the roadside.

We were now racing for the hotel, but the sky was darkening & once more we got a little wet, but not too bad & arrived safely at our hotel for the next four nights, which has a row of rooms in the car park, each with its’ own front door – very nice. 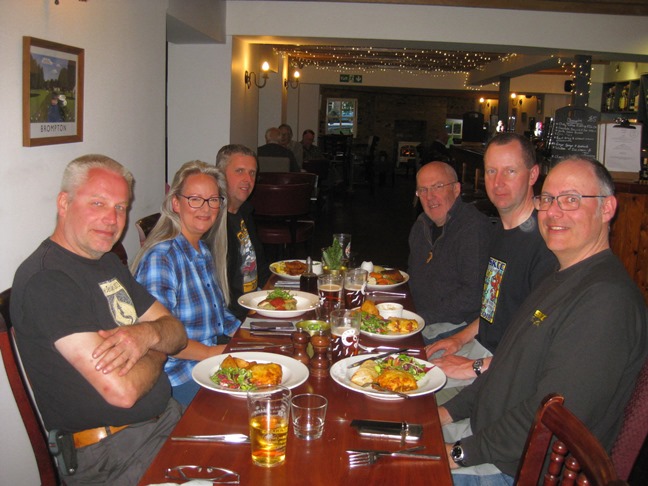