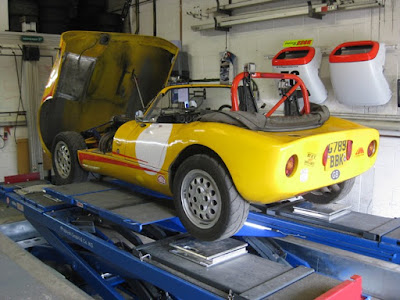 Today I took the car round the M25 to Boss Racing near Brands Hatch for a geo & corner weight check, after a thorough go over, it turned out that the car was corectly set up except for the offside front wheel which was of concern due to having practically no castor (it’s not adjustable) & very little camber (the lock nut was seized) so there was nothing that could be done. Even the corner weights were right, after the careful set-up procedure which consisted of me measuring the length of the spring with a steel rule. 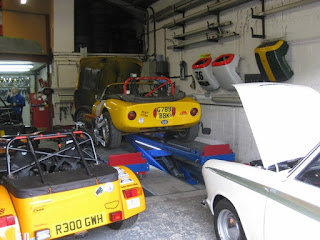 So the car is “bench-marked” & I can sort it out at my leisure. I had trouble with the lock-nuts being seized before & had to cut them off & get replacements, so I'm not looking forward to that, but even so, the castor is more of an issue. I'll need to draw out the suspension on CAD, work out what needs to move & by how much & then work out how to do it.
Yes, that is an original Lotus Cortina. It was having the twin Webers set up by an old guy in an "overall coat", white hair, stethoscope, changing the jets by just listening to the carbs. They don't make them like him any more! It was running much smoother when it left
Posted by BlatterBeast at 18:28