Bit of a long story, but on the last blatt I had the headlights on for the first time in ages, & being dark, I noticed the battery light glowing slightly. The following day I got the car out to go to work, the light was full on - so there was a problem. The Fury was grumpily consigned to the garage.

Attempts to diagnose it's ills through the medium of Google unearthed the usual array of half truths & entirely unrelated tosh, except for a couple of items buried deep in forums, one was a guy who'd had his alternator overheat due to insufficient wire capacity, another was a guy who'd cooked the alternator by over-speeding it.

In time honoured fashion, it was time to " 'av the back off it" which revealed the following scene of horror:- 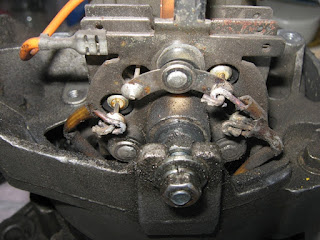 Lucas alternator aficionados will immediately notice the three wires from the main windings are not soldered to the tags. They were when I last looked. So yes - a fair bet it's been pretty toasty in there. Without much hope I re-soldered them & joy of joys it worked! dash light went out & everything. I decided to try both the fixes & ran a wire from the second connector to the starter motor so all the current wasn't going through just one connector. Then I looked at pulleys.

My research had revealed that an 18ACR alternator should spin at 12,000 RPM max. The engine pulley was 130mm dia, the alt pulley was 55mm. So the alt. was spinning about 2 1/2 times as fast as the engine, so at the 7k rpm redline, that's erm - 17,500. In fact the alt was all out of puff at a pedestrian 4,800 engine rpm. I had assumed it to be OK as the pulley is off a Zetec Mondeo, but either they have a much smaller crank pulley, or they're rated to much higher RPM. It looked like the ideal was 73mm dia, & several websites were keen to sell me a bespoke, lovingly crafted piece of aluminium alloy for upwards of £80 - thanks, but no, I like to save lbs, but I also like to save £s. I did find a guy selling something that was almost what I wanted on e-bay for a more reasonable £25, but he didn't respond to my e-mail. So for the princely sum of £12, I purchased a steel "item" from a boatyard, which was the right diameter - but weighed in at a hefty 565g.

What to do? An e-mail to the esteemed Neil (he of the "ManCave" noted previously in this tome) arranged to put it on his lathe & remove some of the pulley's girth.

This morning I popped over because he'd "be in the garage working on the car" & we set to. Cutter access proved to be an issue, so the milling machine was called into play. Neil had just taken delivery of a rotating table, which as luck (for me) would have it, was just the right size for the pulley, so Neil got to grips with it & cut eight lightening holes in the pulley web. The experimenting with ways of working & setting up the table was great fun, but rather time consuming & I have to admit that by the time the pulley was finished, all Neil's play time was used up & not a thing had been done to his car. I'll pay him back in time when there's something on his car I can help with. 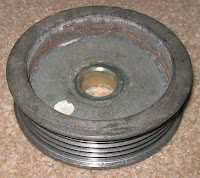 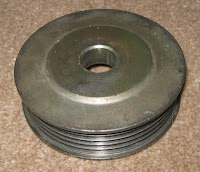 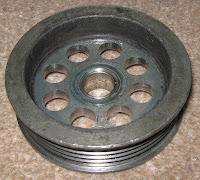 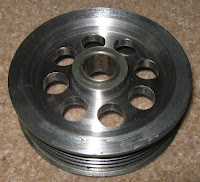 The pulley is now a svelte 380g. There was talk in the Cave about balancing & the possibility of using the accelerometer in an iPhone to check for balance, but being a simple soul, I went home & rolled it along the kitchen worktop. When it came to rest I marked the lowest point I rolled it again in the same place, it stopped 1/4 turn out, on the third roll it stopped just over a 1/4 turn the other way, & the forth roll stopped somewhere around 1/2 a turn off (ish), so I think it's a balanced as it needs to be - anyway, alternator bearings are cheap.

So tomorrow I'll pick up the new drive belt & get it all on the car, but this evening finds me woman free, so I sit here eating pizza while typing & drinking red wine from a tumbler - hurrah!! (fear not dear reader I am NOT dressed in only a vest & Y-fronts - I'm not that blokey).﻿
Posted by BlatterBeast at 18:17