Mid-week evening runs seem to be gaining popularity in the SKCC western fringes, this week David T posted up a suggestion but I was the only one able to join him. There being no time for research & route planning we decided to wing it & just point the cars vaguely at Pulborough & see if we found it. David T headed off first as he knew the road through Elstead – as it turned out so did I as I used to drive that way from Dunsfold to Farnborough, but I hadn’t put two & two together when we looked at the map.
I took over the lead as we crossed the A3 & we plunged south along one of the nicest roads in the area, unfortunately occupied by the last stragglers of rush hour & a learner or two, but the traffic thinned as we went along & there were some decent stretches to be enjoyed.

I’m increasingly baffled at “the older generation”. Driving through Petworth, a bloke best described as a “codger” waved his hand frantically at me, palm down, in the internationally accepted gesture for slow down, as I passed he shouted “SLOWLY!”, I double checked the speedo – 27mph & my speedo reads about 15% over. This is the third time I’ve been gesticulated at this way by old folk (OK, about ten-ish years older than me). I guess they see a fast car & assume it’s going fast? Who knows what goes on in the head of a geriatric.


So – slightly irritated we continued south eastish for Pulborough through increasingly deserted lanes. I arrived at one tee junction -nothing coming - pull out – check mirror to make sure David was following –milk tanker. In my defence, the junction was on a hill & a bend & the footage from the rear camera shows I wouldn’t have seen the tanker when I was at the give way sign, but the truck slowed our progress somewhat as the road climbed, dived & twisted through fields & copses. Eventually David T found a safe passing place & we were re-united, but on entering Pulborough town, I was negotiating a mini roundabout when I noticed hand signals from behind & realised we’d probably overshot our objective, so David led us a mile or so back out of town & down a lane to find an idyllic pub on a river bank with an old stone bridge. 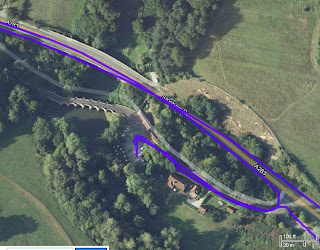 Obviously this used to be the route of the road, but with increasing traffic, the middle-ages single-track stone bridge was a bit of a bottleneck, so a new one had been built, leaving the pub to nestle in its’ hollow. We chatted for ½ an hour or so over a drink, then mounted up & headed for home.

This was accomplished by setting the satnav for Liphook by the shortest route & it found a wonderful tree covered lane, but it was very dark & my lights are not well aimed. The camera footage from this section is just black, with occasional road signs flashing past, the rear camera picked up a similarly black scene, but with the flare from David’s lights leaping from side to side & top to bottom of the screen as the road rolled & twisted. I enjoyed this part of the journey, but all too soon we reached the A3 as intended just south of the tunnel. As is often the case at this time of the evening we were the only cars in the tunnel, so there may have been a certain amount of well judged shenanigans involving dropping into third & accelerating. Then we emerged in to the dark again & at the next junction we went our separate ways.
Posted by BlatterBeast at 15:35