Last weekend I girded my loins & set to taking the Quantum apart. As usual the engine started up straight away so I could square it up in the garage - I just hope it's as reliable when all this is over.

I took all the ancillaries off & put some parts through my new parts washer ready for paint. It's pretty obvious the engine isn't going to come off the gearbox because the sub-fame's in the way, so the plan is to lift the car off the engine / gearbox / front suspension. 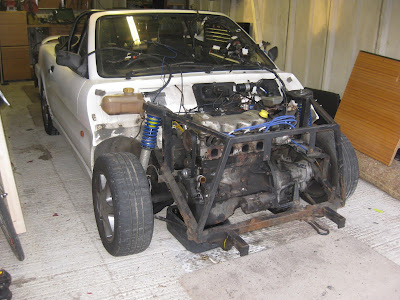 On the dissapointing side, the gearshift isn't going to be easy to improve. It seems that on the early gearboxes the stick "feel" that sort of guides the gearstick into the gates was done at the gear change, on the later cars that was all done in the gearbox. Unfortunatly I have an early gearbox with no "feel" & a late gear change - with no "feel" which is why the gearstick feels like it's not attached to anything. 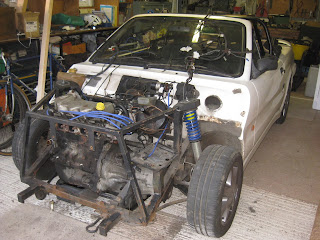 I spent an hour carefully re-shaping the birds nest of brake lines outboard of the brake servo to a/ make them look better & not rub against each other & b/ so I could fit a swirl pot in the space I'd created. Then I decided to put a fuel plate for the pumps & filters under the back seat where there's plenty of space. I'm sure there's something else I can put next to the servo.