Another weekend spent mostly under the car, this time without achieving a great deal, Thursday last week saw the arrival of the new plenum from KitSpares, I'd been looking forward to this as one of the more interesting parts of the job, but as is so often the case with aftermarket car parts it was a disapointment. 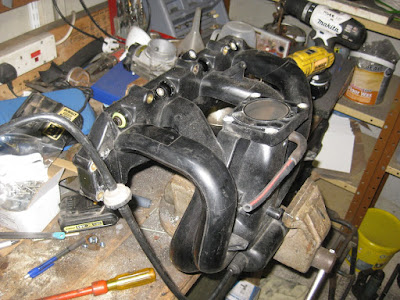 Firstly it weighs a ton, far more than it needs to weigh - I say this as a man who made a vey similar part for the Fury, but secondly it just doesn't fit. I wasn't expecting it to fit in the car, it's designed for a seven with the engine the right way round, but it doesn't even fit on the Ford pards it's supposed to mate with. 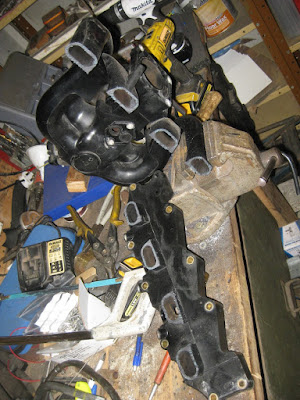 At the engine end the idea is that you cut the "runners" off the Ford inlet manifold, grind it flat & use it as a sandwich plate to hold the injectors & fuel rail. But the bosses for the fuel rail mountings hit the plenum mounting flange so the holes don't come close to aligning - they are out by the diameter on the hole.

At the other (upstream) it's just as bad, studs are welded on to mount the Ford throttle body, the studs are 18mm long, the mounting flange on the throttle body is 15mm thick meaning the studs don't go far enough into the nuts to hit the nylon lock. Worse than that, fit a gasket & washers & there is no thread to engage the nut at all!

I can cut the studs down if they're too long, but too short is a disaster.

Anyway - I thinks I have a work around that may work to my advantage - more news as it breaks. 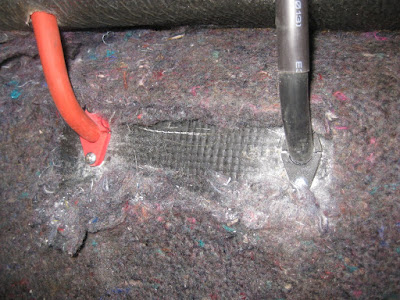 Friday saw a veritble shower of things arriving in the post, so first thing on Saturday I sallied forth to get them fitted. The first thing I aimed at was the wireing run from the new battery position in the boot, up to the front of the car. I fitted terminals to the cables (35mmsq - the size of my finger!) put them where I wanted them & drilled 16mm holes for the fittings I showed you a couple of posts back - that worked spectacularly well but put the cables right where the rear axle tube was, so I found some proper aircraft P-clips & clipped the cables up & over that, alongside the fuel tank & through the transmission tunnel that isn't. 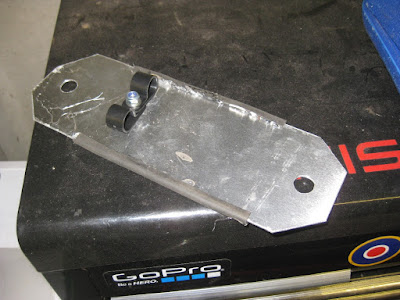 Getting them past the handbrake mechanism taxed me a little, I didn't want the cables anywhere near the moving mechanical parts at the top of the tunnel, but the sides are occupied by the fuel lines one side & the brake lines the other. In the end I made a plate to fit between the seat mounting bolts, bridging the tunnel & mounted the cables to the upper side of that. Further forward the tunnel is deeper & there's more options.

I put another terminal on the earth wire (plastic cars need an earth line) & fitted a riv-nut to bolt it to the engine cradle just inside the engine bay, the live I've left dangling until the engine is in. All that took a day as I didn't want to trust pop-rivet so had to remove most of the interior to fit bolts to attach the P-clips - a proper faff, but worth it. 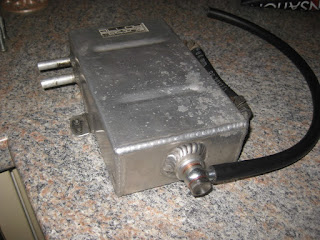 Today I turned my attention to the fuel system, starting by de-rusting & treating the fuel tank (also the rear axle tube & the rear trailing arms while I was there). I've just about positioned the high & low pressure fuel pumps on the fuel system plate, but I'm waiting for a few more bits to arrive in the post before I commit holes. I did open up the drain hole in the bottom of an old oil catch tank to M10 & fitted a banjo bolt because the tank will be the fuel swirl pot & the banjo fitting will be the air route back to the tank. There are of course lots of shiny swirl pots available, but unless you have a particular polished aluminium fetish they are without exception a waste of money, all you need to do is slow down the flow of the fuel so the the air can rise to the top, then vent that back to the tank. Almost any fuel-tight container will do - on the Rickman I used an old fuel filter from a scrapped Sierra, this is the second time I've used an old catch tank. Swirl pots are FREE.

Another thing to get attended to was the handbrake, The guy I bought the car from said he'd changed the handbrake cable & indeed it looks new, however, it feels awful, it's notchy & it doesn't pull the brakes on - at all - my drive really doesn't slope much, but the car will roll down it with the handbrake on. Looking underneath It's the usual kit car thing of not holding the cable outer in line with the cable run, so it twists & snags the cable inner. I simply made up an aluminium channel with a P-clips at each end to hold the cable outers togethr about an inch away from the mounting plate, now the outers have to stay aligned, the inners don't get trapped. Then I made a strap to hold the near side cable outer up, the offside one will be clipped to the fuel plate.

Little by little the car comes together.