The following day was not so lucky. I spent the whole morning trying to take the fuel tank out - failed. I did succeed in replacing a couple of very rusty spacers with plastic ones. The chassis paint was oll dry - still on my hands 3 three later, after that I did some investigating & also made a brace for the handbrake that stops it being pulled to one side & binding up the cable, maybe the brake will now be capable of holding the car on a gentle gradient - which would bee nice - but as the cars a foot in the air with all the wheels dangling, I'm unlikely to find out any time soon.

While I was under the car I made up a fuel plate to carry the low pressure pump, swirl pot & high pressure pump. Hopefully the high pressure filter as well if there's space. It's made from an aluminium box lid I liberated from a scrap bin some time ago. 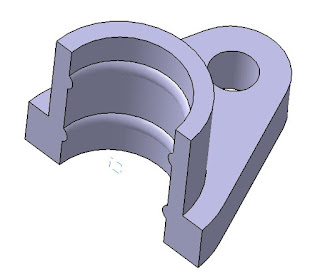 Since then I've been mostly spending money, many many small items are on thier way to me - the first of which - the battery cable, arrived today. As I sit here I've drawn up a fairlead to take it through the boot wall into the space under the car to run forward the the engine bay, so as soon as the 3D printer's finished a re-print of something I posted to someone but it never arrived, I'll pint the fairlead (two halves) & hopefully the terminals will arrive tomorrow & I can get that finished. Also on it's way is a very expensive plenum for the inlet side of the engine.