We'd been trying to do an Edenbridge to Isfield run for a few weeks, but the weather was against us & indeed it looked as if we'd be rained off again right up to the Saturday evening when the forecast suggested it should stop just before the off.

The alarm chimed at 05:30 & I made my way out to the garage, I had a bag packed as it was my Dad's 90th birthday bash & I would be going straight there - it was also my Dad & his wife's 23th wedding anniversary & as the "thing" for that is china, I'd bough them a very expensive teapot - which I would have in the car on the blatt - what could possibly go wrong eh? 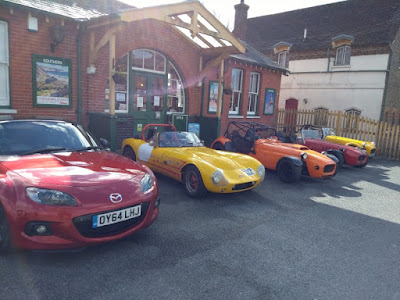 As I left the house is was still just drizzling, but I went roofless & it soon stopped. We all arrived at the meet point more-or-less together & set off promptly, the roads were wet & strewn with twigs & lumps of dead branch, but the new tyres (Uniroyal RainExpert IIIs) coped admirably, I was very impressed by them. There were the inevitable satnav issues & closed roads to contend with, but soon enough were in the café beakfasting & chatting. 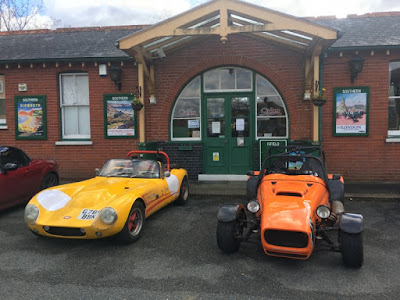 Post breakfast we set off for home and there in lies a tale. I saw Tony B coming back, he pointed at a fallen tree blocking a road we'd come along about 3/4 of an hour before & I decided to turn around. So I went forwards across the road, stopped, went backwards across the road, stopped & just as I engaged 1st again, I felt the car roll back a further inch & drop into a ditch - there was a thud as chassis hit tarmac. I radioed GB but he was away on his tyres (I guess he didn't have his radio on), 1st gear did nothing, reverse just showered me & the car with mud.

So I called the fallen tree into the police as well as the other road blockage - me, then a nice man in a merc stopped & we considered ways of extricating my car. He suggested we could lift it, but a short test said that wasn't going to work, he said he had a tractor that would pull it out - but it wasn't road legal & the police were on their way, I'd got the tow rope round a front wishbone & we were going to try to pull the front sideways to lift one rear wheel back onto the road & then the other, when another couple turned up, so after a brief planning session my new best friends lifted the rear wheel arches, while I (braced against a fence post) pushed on the roll bar & ........ it came out of the ditch!

I thanked them profusely & headed back to my Dad's, finding another fallen tree blocking the A23 (I think) & another between Westerham & Farliegh where a curved tree had fallen right across the road, but because it was a curved tree the traffic was just driving under the arch it had made - quite surreal.
Posted by BlatterBeast at 22:15