Messing about under the car taking measurements for alloy panels I noticed the starter motor appeared to be leaking. Clambering topside, I realised the leak was coming from a seam in the thermostat housing - a known problem with zetecs, but not one I was expecting to encounter yet.

I went straight to Ebay & there was an early zetec housing up for sale, these are alloy castings & much more robust (& shiny), I put on an outrageously large bid & got it for just less.


The alloy ‘stat housing arrived & I cleaned it up, all the pipes are in the same place as the plastic one, but there was one open threaded hole in the top. This was the fan switch on the car it came from, my car has a fan switch in the radiator & is also switched by the ECU, so I don’t need this hole. I was just going to plug it, but I took it into work to measure the thread & a conversation got going, the upshot of which was that it went down to the machine shop to get the area around the thread flattened off, so I can fit a plug, a vent, or a thermo-switch as required. In this photo, the old split one is black & the shiny ally one is the new (older) one. 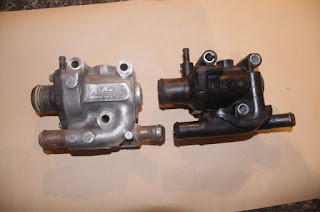 I had to make a gasket as the old one has a rubber o-ring & the new one is more old school, but it’ll be fine with some jollop on. The alloy housing is a lot heavier than the plastic one, but reliability wins this one.


Yesterday evening I took the housings apart to find the alloy one all covered with silicone sealant & the thermostat rattling about. The thermostat should have a seal round it that seals between the body & the cap, so with it missing there was nothing to stop the coolant peeing out, hence the silicone the previous owner had ladled on. I re-assembled it correctly. 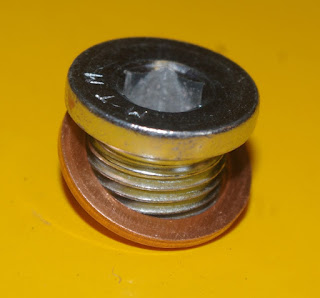 On the way home from work I called into Margnor & picked up three stainless cap head bolts & washers to hold the cap onto the body & an M16 x 1.5 tapered grub screw to seal the hole in the top. Unfortunately the grub screw didn’t quite seal, after ten minutes running it had just filled the hex socket, good, but not good enough - it must've been leaking atom by atom. So back to the excellent Margnor where they produced a “cylindrical plug” which when used in conjunction with a soft copper washer onto my new machined flat face – sealed. Yay! 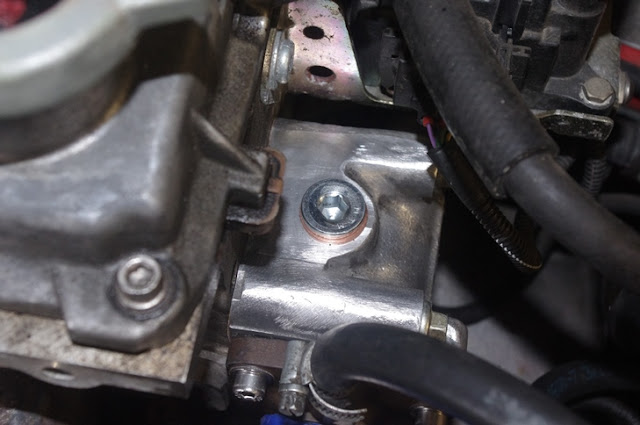