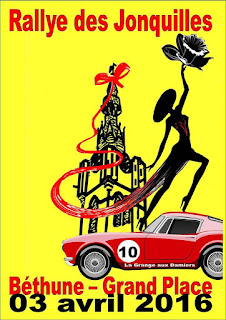 The Rallye des Jonquilles 2016. I’d been looking forward to this for some time, which made it all the more worrying when my elder daughter broke her collar bone the weekend before. However arrangements for friends & helpers were made (she is 21) & at 06:30 on the 2nd of April we set off. The trip to Folkestone was, as usual dull, cold & long, we tend to put the iPods on loud, shuffle down out of the wind & just get it done.

This time the Rallye went from Béthune – I’m still not sure if it’s pronounced Bethoon, Betonay, Betoon or another possibility. Pulling into the tunnel terminal, we found Matt, Matt Jr & the two Matt Srs, shortly afterwards Crunchie, Mrs Crunchie & the Larks arrived, but there was the inevitable problem with booking which meant Crunchie ended up on the following train, ironically with Bahnstormer who was actually booked onto the train before ours. No matter, we had arrangements to meet at the fuel stop just as you leave the terminal. 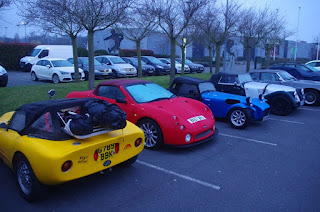 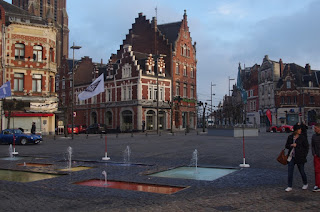 Except either something’s changed, or the dastardly French were determined to wrong-foot the plucky Brits from the off & sent us out another way. Whatever, we found fuel, sent a text outlining the problem to those on the following train & headed to Cap Gris Nez (Cap Gree Nay) where traditionally would-be invaders queue up to give England a hard stare before being rebuffed. We were surprised to hear over the radio that Crunchie & co were already there. Not sure how that happened but all’s well that ends well. We strolled up to the headland asking each other if that whitish smudge between the fog & the sea could possibly be England, then we drove off. We convoyed through the countryside with the weather slowly improving, but time was not on our side & eventually we set the SatNavs to head directly for lunch at the Grange Aux Damiers’ club house, which sparked a debate about whether to use the toll road or not, some of us did & handed over the princely sum of 70 Euro cents, the others elected to take the slower route & naturally turned into the clubhouse lane just before us.


The lunch was as ever, very good indeed & we collected our rallye packs & departed in good spirits, heading for our hotel. It was about here that one of us picked up a French bird, who was taken back to the hotel only to be dumped the following morning, it looked like a green finch to me. Also somewhere on this section I was driving along when I realised there was no car behind me – strange – I then noticed in the driver’s door mirror that it was on the other side of the road “they must be over that side to  take photos of my car” I thought WRONGLY. The hotel was modern & on a commercial estate, but was clean & bright & most importantly, had a bar. A quick reconnoitre identified at least nine restaurants within staggering distance, so arrangements were made to visit the Italian two doors down. Again the food was good & the wine & conversation flowed. 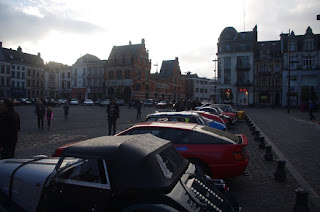 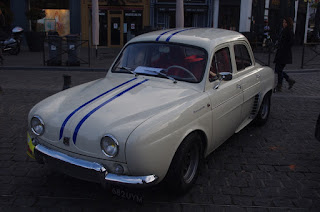 So – Rallye day, coincidentally Mrs Blatter & I’s 23rd wedding anniversary. As usual it took an age to prepare the car. Soft top, side windows, steering lock & solar charger all needed to be removed & stowed, but it was DRY & the forecast was predicting temperatures in the mid 20s. But first, petrol, we asked the SatNavs to take us to the nearest fuel stop on the route to Béthune, which tuned out to be just off a roundabout (which I missed) but why did the SatNav take me to a grave yard?? Anyway, all fuelled up we arrived at the beautiful town square, parked up under the beautiful (& melodious) clock tower, & went for coffee & croissants in the beautiful town hall.


At 09:00 cars started leaving, so we stuck on the rallye plaque, strapped in, started the cameras & the SatNavs, opened the road book & joined the queue – NOT belching smoke like last year. Also unlike last year we weren’t immediately lost, in fact we got almost out of town before the first mistake. I must’ve been distracted when the rallye plaque flew off the front of the car. 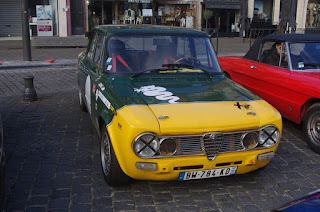 So the sun was shining, the car was running well & we cruised through the French countryside. Our task on the first section was to look out for town signs & collect the first two letters of every “you are now leaving ……..” type sign, easy enough you would’ve thought, but noticing them while navigating & driving on the other side of the road is quite a challenge, but the form seemed reasonably full when we handed it in at the coffee stop. The next stage was much the same, except the signs we were looking for were at the beginning of the town, so there was less warning & we got lost around Crepy (known as “creepy” in my car) with the result that the first four or five boxes had “CR” written in them. Along here somewhere I was following a Ferrari 430 (I think) & queueing to cross a main road, there was a space big enough for two cars & the Ferrari floored it & so did I – it didn’t get away, ok it was a narrow bumpy lane which gave the Fury a big advantage & we only got up to about 50, but I’ll take that as a win thank you very much. 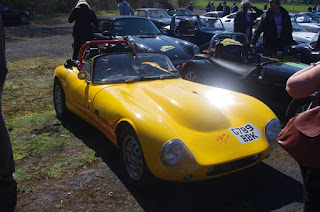 By now it was getting pretty warm & I could feel the sun on my face, as we headed into the lunch stop. We met up with some of our group & gratefully accepted the aperitif in the restaurant garden before going inside to look for the others, we never did find them. No matter, the lunch was excellent & as we made our way out into the sunshine again our missing friends were in the queue of cars waiting to leave, it seems they had been directed into the first room & not allowed to reserve seats – understandable as the waiters were serving one room at a time, having folk on different courses because they had waited would’ve been a nightmare. 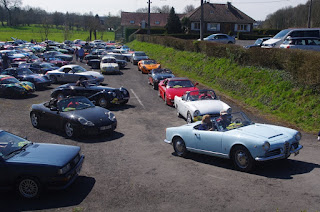 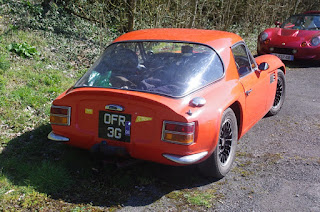 During the lunch stop I mentioned that my Rallye Plaque had flown away & was handed a spare, which was nice – I now have plaques from four years, I need a man cave. After lunch I have to admit we kind of gave up & just followed people, there are no activities in the third section, so my navigator took photos as we bimbled along in the sunshine. When we returned to Béthune, the town square was awash with a few thousand spectators & bystanders, thronging the cars & asking questions. Usually I get asked what the car is, sometimes “is it a Ginetta? But one Frenchman asked in broken English was it a “Feeshur” or a “Seelvurrr” I was impressed. 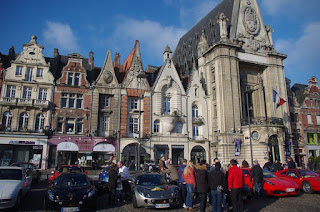 Once again the rallye organisation had been faultless - even the weather had been arranged, so our heartfelt thanks go to the gentlemen of La Grange Aux Damiers 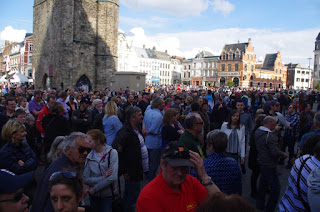 We watched the award ceremony (no silverware for us AGAIN) then said our farewells & climbed aboard. Three of us headed for a fuel stop to top up the tanks, then two pointed north for the tunnel, while myself & Mrs Blatter headed east for Lille & the remainder of our anniversary. But that’s a different story. 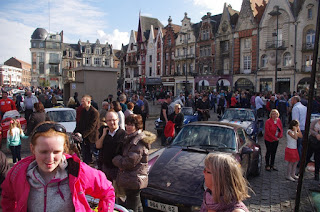