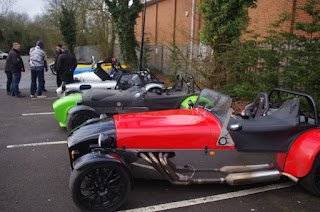 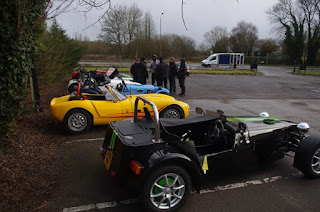 Another early jaunt along the M25 for the start of this, my second blatt of the year and it was cold. The temperature was well above freezing (about +6), but somehow seemed to suck any warmth out. Anyway on arrival, I saw one of our number pulling out of a petrol station as I was pulling in, so I knew I wasn't the first to arrive, but then managed to ignore him & drive straight past the meet point. A once-round-the-roundabout & back followed & this time GB was stood in the road waving - more difficult to miss - I parked up at the end of a row of five cars & the last of our number arrived shortly afterwards making seven - six se7ens & a Fury.

Greetings were exchanged along with stories of winter upgrades & comments about how cold it felt (have I mentioned how cold it felt?) & after a few minutes we set off, all chatting happily on out radios (most of what I could hear was "chweeeeeeeechchwii FU chewwrrfffffffhhchchwee CUN shwfffff") 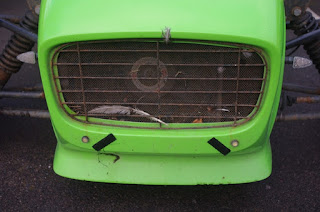 It did look as if one of our happy band had hit some wildlife on the way - presumably that's what knocked off the front No. plate. 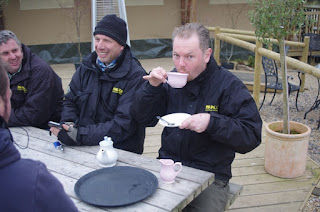 As is often the case I was soon left by the front runners, & pootled along at the head of the second group, then after an overtake or two, lost contact with them as well, no matter we'd re-group at the inevitable "Tony stop" (one of the group has what I shall call "a limited range" for the sake of decency), however I must have passed them without noticing (again) as I arrived at the breakfast stop first, shortly followed by someone who had been absent from the blatt, but had appeared for the breakfast. The two of us elected to sit inside as it was SO cold, but there was only a table for four available, so when the others rolled up we de-camped outside & thus caused our perfectly normal level of confusion with the waiting staff.

There was a certain amount of banter inspired by the teapot, pink milk jug & cup given to my fellow early-bird, the others mostly got their drinks in insulated mugs which was a nice touch. 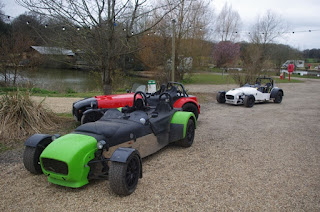 And so it was that after a chat & a good feed we said our farewells & departed, I fell in with a group of four heading north through the lanes until level with Dorking where I dropped out of formation & headed west. All in all a pleasant way to spend a Sunday morning - though it was cold. 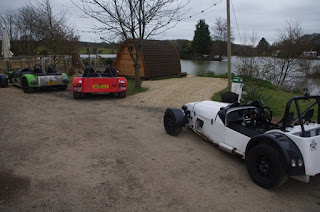