Well, having decided that the sender was the problem with the speedo, I bought a sender from a Fiesta Mk V or VI, I used one on the Rickman to get a speed signal to the ECU, so I knew how to mount it. On that occasion I bought a bolt to fit the thread (M18 x 1.5) & turned it down to make a bush, this time I bought a Lambda sensor port plug which had the right thread, the right size & all it needed was the head trimmed down  (hence the tile) by 2mm & the allen socket opened into a 10mm hole. 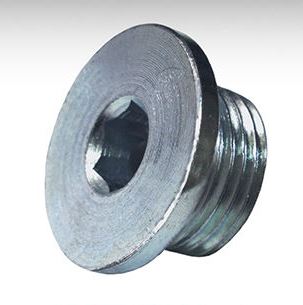 With that done by the machine shop at work, it fitted a treat with the stock circlip. The speed sensor turned up the following day & I set up the sender, the speedo & an old battery on the bench (OK on the breakfast bar - my wife's away this weekend) & a test proved it worked, so I extended the wires & ran them through the car, at which point it all still worked. I screwed it onto the adaptor & thought the end was a bit close to a bolt tail holding the gearbox cross member, that turned out to be not tight enough, so it was unscrewed & replaced the other way up, the sensor was fitted & all the wires soldered on to their correct places. Then I went in for tea. Will it work? I'll find out tomorrow. 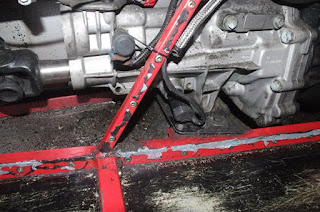 I took no photos of the adaptor before I fitted it, but here's a couple of the sensor screwed to it. It all works rather well - as long as it works
I have some more jobs to do tomorrow (assuming I'm not getting cross with the speedo). I need to make up a bracket for the two way radio's "Press To Transmit" button. I've drawn one up today, so if all's well with the dash, I should have time to indulge in a little bracketteering. 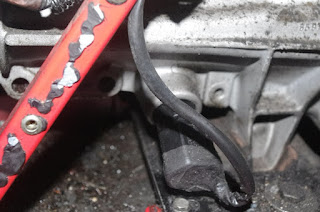