So - still next-to-nothing going on at work, in the absence of anything that NEEDS doing, I've spent some time teaching myself about surface generation on CATIA. What I ideally need is something that's while it's a complex shape, is actually made up of fairly simple shapes. It needs to be something with a shape that's familiar to me, so I can tell what looks right & what doesn't.

Hold on just a minute!

It had to be either the car or my Wife, so erring on the side of caution, I went for the car.

My good friend Chris Chapman drew up the Fury chassis many years ago from dimensions I'd supplied & as I've used bits of it to draw things up I've adapted & added to the chassis model, but apart from the rear valence & a small area of bonnet, I'd never tried to re-create the bodywork. 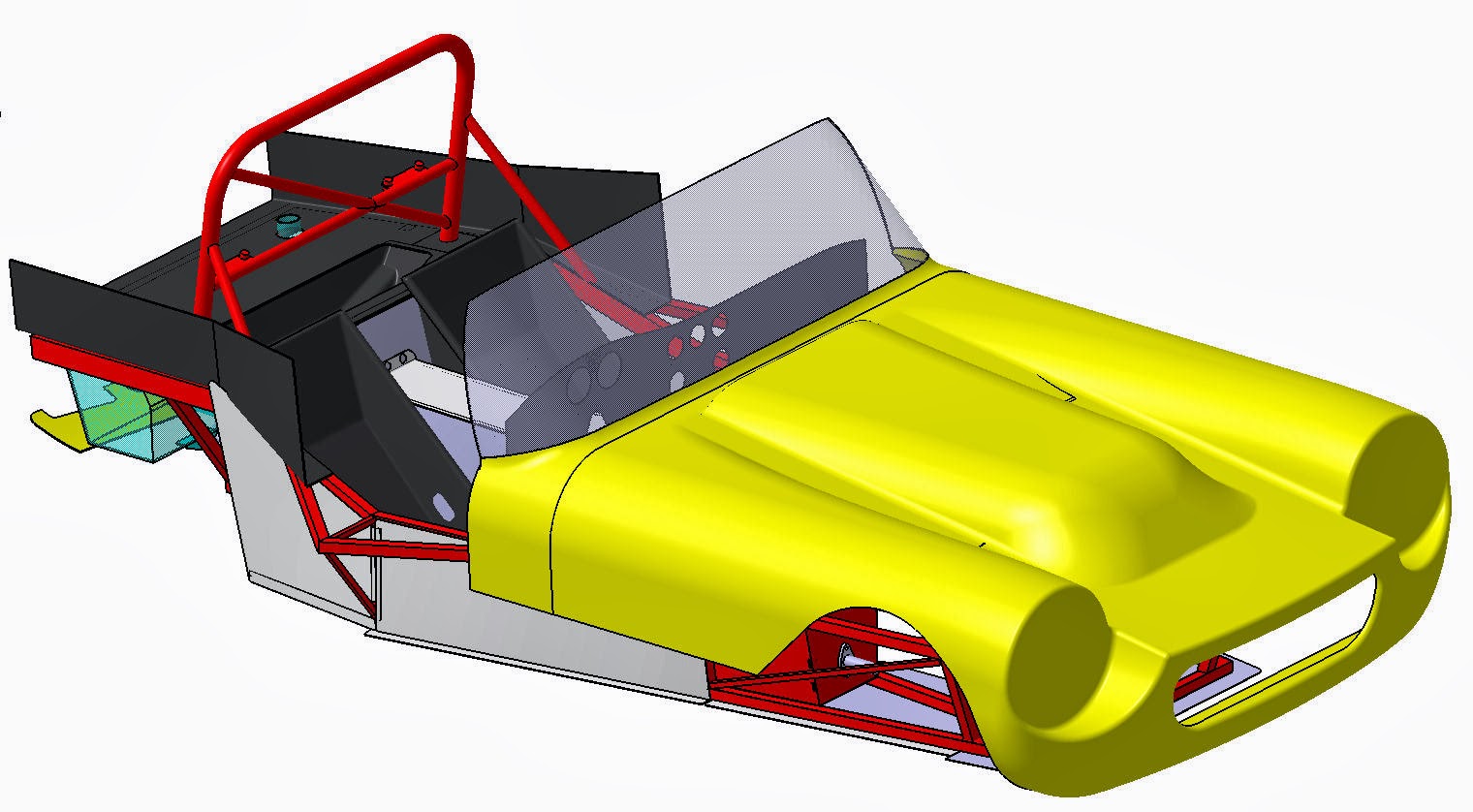 I then moved on to the rear tub, this time using surfaces to create something that was pretty close to being Fury shaped. The technique is fairly simple, draw the cross-section at the front & the back, draw a couple of cross sections in between, join the cross sections up with curvy lines & the computer creates a surface that goes through all those lines. Of course the trick is to get all the lines in the right place & the "tension" on the surface right.

It actually went pretty well & after a day or so it was good enough to make the bonnet look stupid, so 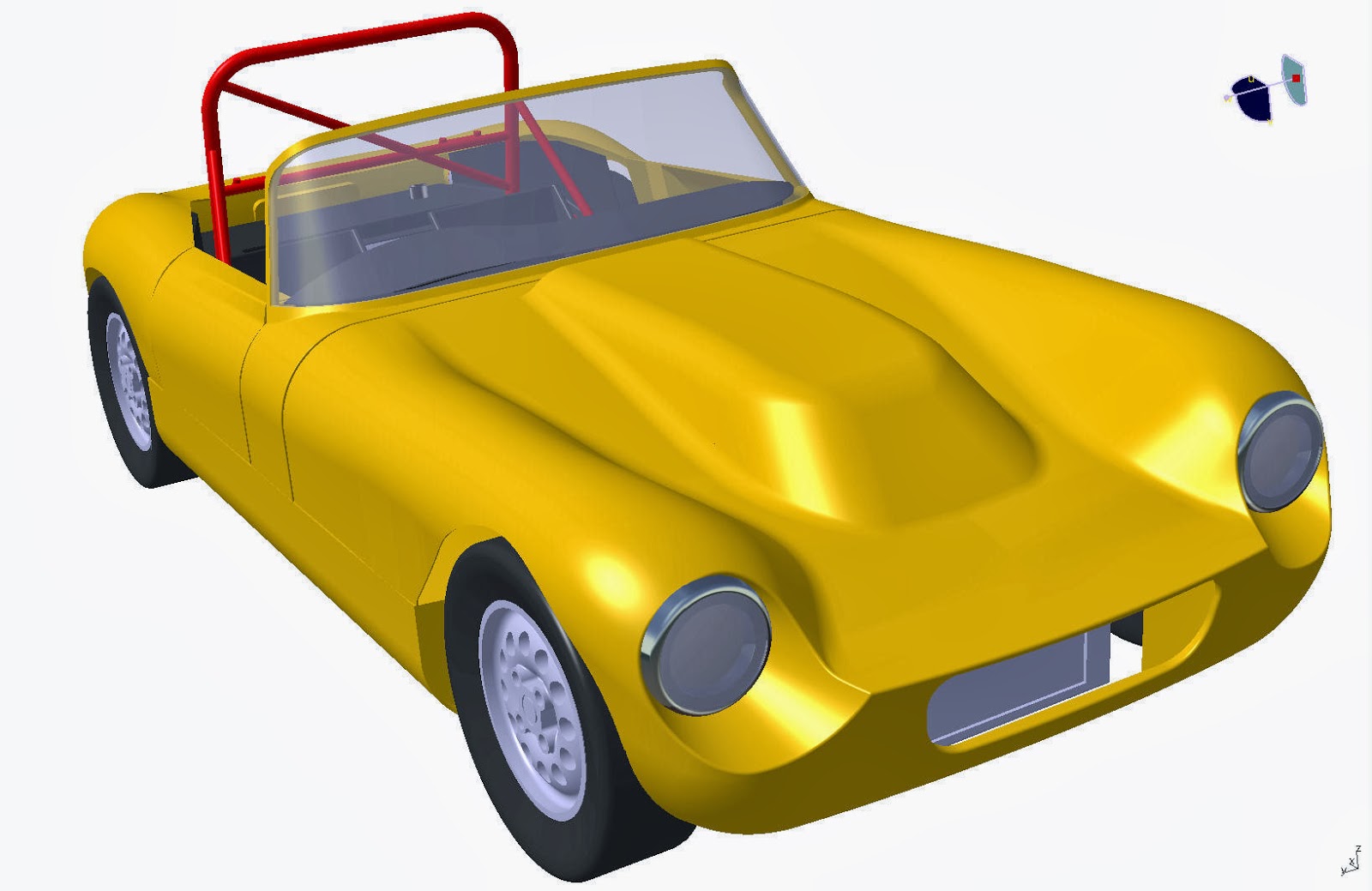 only one thing to do, create a bonnet surface. This was a lot more complex as the wings have to sweep gracefully over the wheel arches & the valleys either side of the hump have to be "just so". It took me a couple of days & it's not by any means perfect, but it's pretty close. Then I went mad. I modelled up the side pods, the doors, the screen (properly) & screen arch, the engine, radiator & put some other engine parts I'd previously modelled onto the engine.

AND I did the wheels. 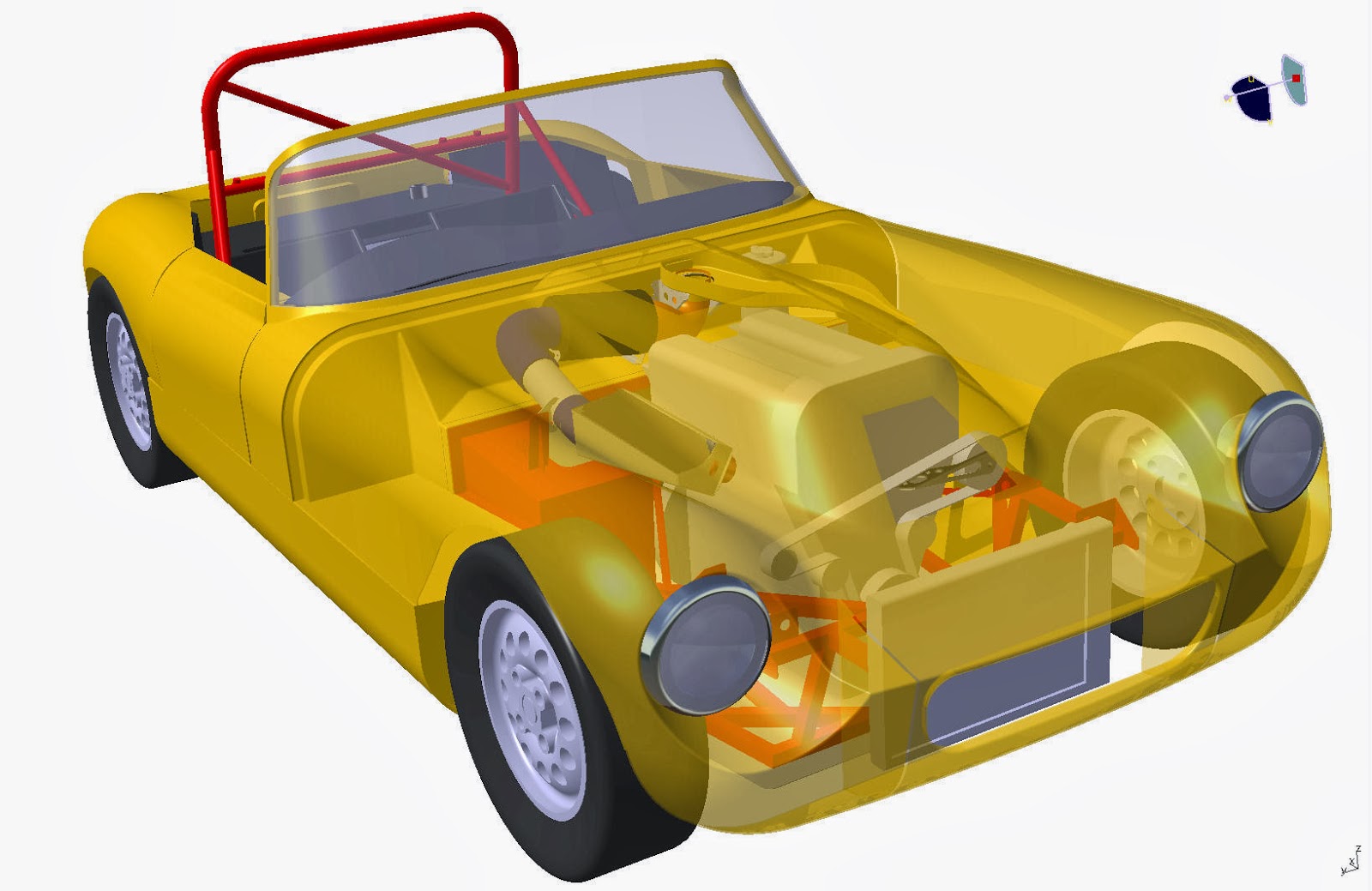 And I did the lights.

And the dash top.

And most importantly, I made it the right shade of yellow.

By now it was looking quite Fury-like, so I ran off a couple of pictures first with the bonnet transparent, then with all the bodywork see-trough. In the '50s & '60s this sort of thing took a skilled technical illustrator months to do, with CATIA, it was about ten button pushes including taking the pictures. 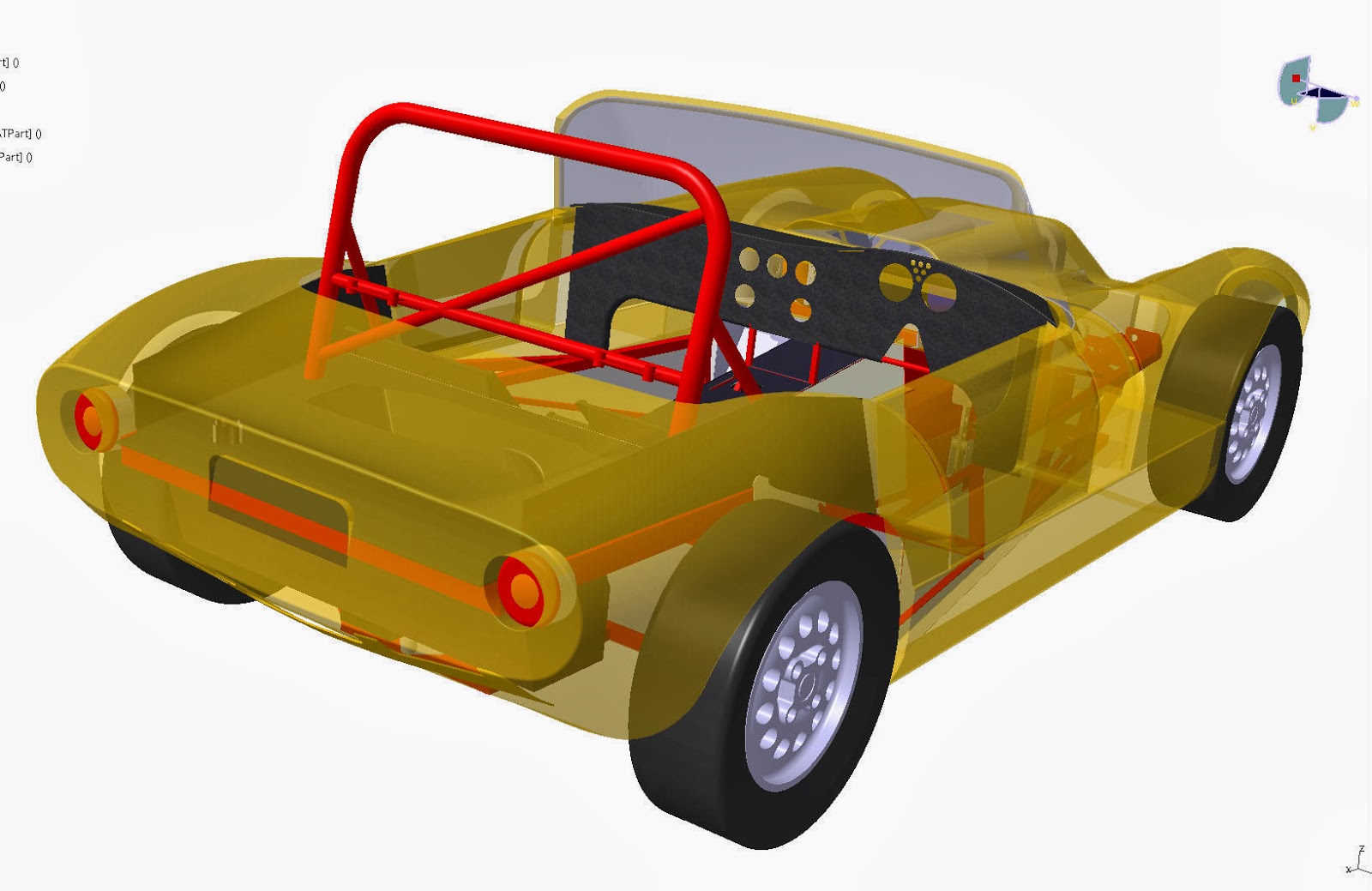 Having spun it around a lot & looked at it from every conceivable angle, I started playing with some of CATIAs other less technical functions, in perspective mode it's possible to zoom right through the bodywork & have a look round the engine bay.


It's also possible to do an exploded view without any explosives. 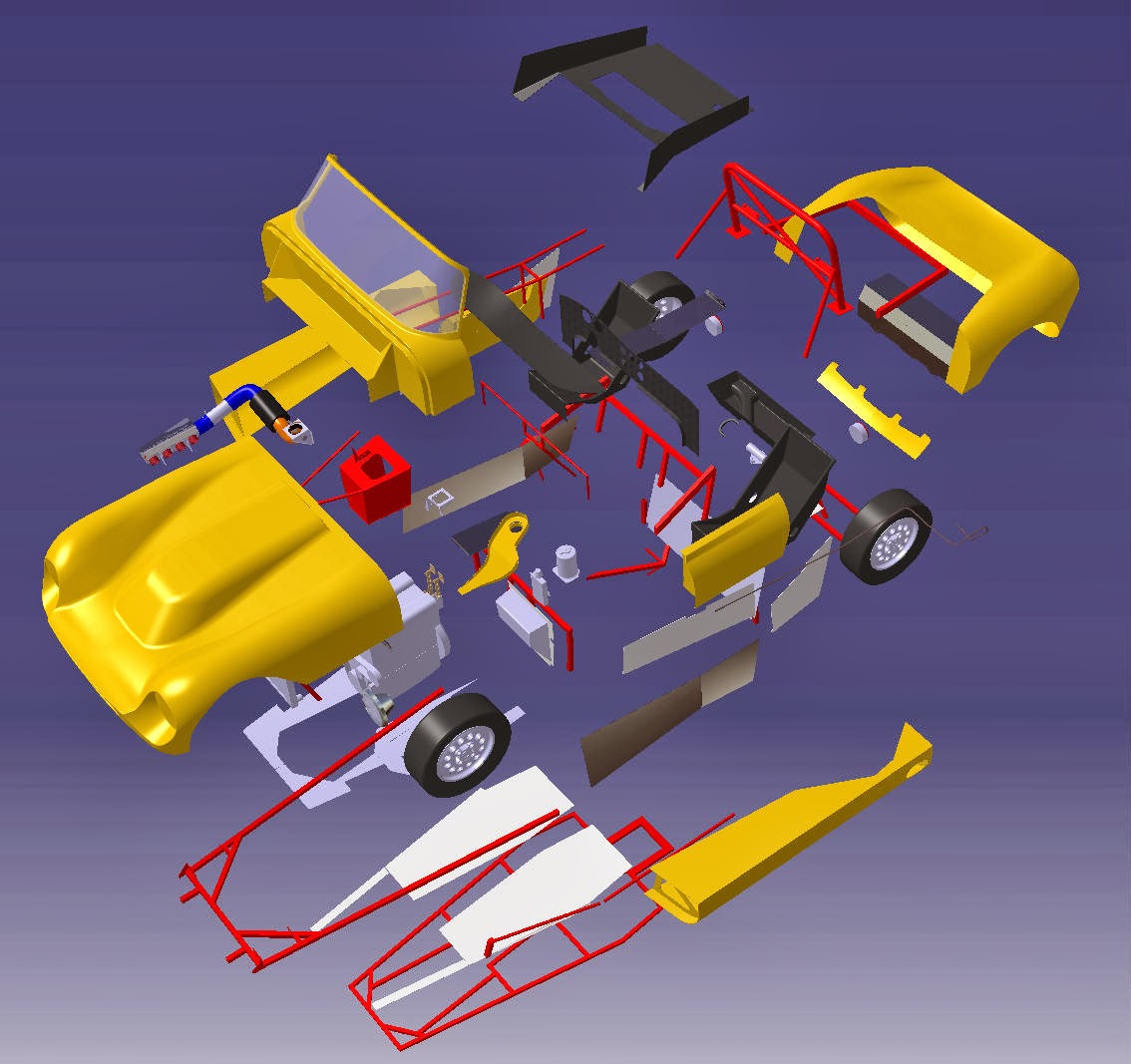 This is particularly good fun as there's a scroll bar that moves all the bits together & apart & the whole "formation" can still be zoomed & rotated. Again, several months work for an illustrator reduced to simply selecting a function & sliding a control.

So what's next? I ought to model up the steering wheel & shaft, to make it look complete. I may draw the suspension arms, but I'll need to measure those before I start, so that might not happen.