The SKCCs plan was to meet at the amusingly named Pease Pottage ready to leave at 07:40. I looked it up on the route planning software which assured me it would take 28 mins to get there. I woke early & crept about – even had time for a coffee before leaving at 07:00. The weather was forecast dry & the sky was light, but leaves & standing water on the road meant caution was the order of the day. So by 07:30 it was pretty obvious I was going to be late, by 07:40 & still some miles short of the meet point, I was glad to notice the SatNav showing the routes in & out were coinciding,  so at least I would see the club coming the other way - & sure enough, that’s what happened - & what a magnificent sight they made coming towards me – on my side of the road overtaking a tin-top (OK it was ½ mile up the road & quite unlike the “near death experience” I was to encounter a little later). 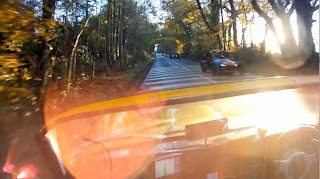 As the last car passed, a drive made a convenient turning place & I set off in pursuit, so all was well. The greasiness of the roads was amply demonstrated after ten minutes or so when one of our number was a little too heavy on the right foot, as I rounded a roundabout, there he was facing me. We pulled over & as he didn’t appear to be moving, I gallantly went round the rest of the roundabout to check all was well. The rest of the SKCC used this opportunity to scarper. As it turned out, Wingco was fine, but having SatNav issues, so I led & kept a close eye on the mirrors to make sure he was still in touch. 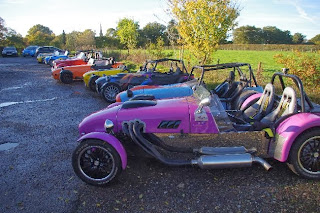 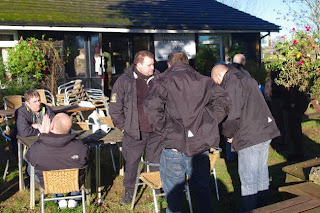 After a while we arrived at the café & ordered up breakfast while the banter flowed & one of our number collected contributions for the wreath & charity donation, then at the allotted time & after an ad-hoc repair or two (this week’s broken cycle wing count was two – not both on the same car) we assembled for the run into to church. The idea was to rumble along in formation & all arrive together, however a flock of Harley Davidson riders left the café at the same time, got in amongst us & slowed the second half of the pack to a crawl. But no-matter, we had a back-up plan to re-form at a junction just before the church, however (again) I loused up the seemingly simple task of changing my SatNav from night display to day display & in doing so managed to change the route altogether. So when it said “turn right” I turned right, in spite of the cars in front & behind going straight on, this happens sometimes & I thought I would re-join the party at the next junction, fortunately I noticed the ETA on the screen was saying 11:19, which couldn’t be right as we needed to be at the church by 10:45. Having stopped, called up the correct route again& deleted all but the last waypoint, I headed off, arriving just after everyone else had parked & dismounted. 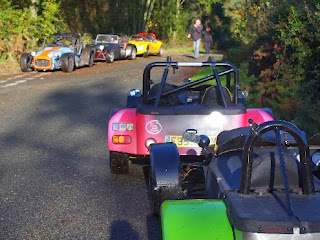 The venue is in a posh little village. I’m talking proper plum-in-the-mouth POSH & make no mistake these people dress for the occasion. There was some discussion the first year as to whether there’d be problems with a bunch of mud-splattered oiks pitching up uninvited, but nothing could be further from the truth. They seem genuinely delighted that a crowd of brightly coloured, noisy cars come out of no-where once a year and their dishevelled drivers amble up like a bunch of schoolboys to deposit a slightly soiled wreath at the foot of their cross. 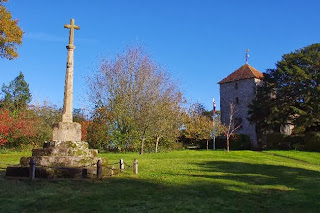 After the wreath-laying we disperse, I took the direct route home, but about mid-way I was rumbling along a nice wide A-road with a right hand bend at the bottom of a long hill, speed limit 60, I was in no hurry, doing maybe 55. I rounded the bend to be faced with a Nissan 4x4 OVERTAKING a Discovery pulling a horsebox! I put two wheels on the verge one my side, the Disco put two wheels on the verge the other & the Nissan just got through. It was really VERY close as you can see in the video – yes, for once I had the camera running when something interesting happened. The video's Below:-
It occurred to me later in the day as I pottered in the garage, had there been about a foot less room, the police would’ve found my camera & data-logger among the twisted wreckage & would by then have arrested the driver of S24UTD for causing death by dangerous driving.

I wonder if they realised how lucky they were?
Posted by BlatterBeast at 18:04