Little's been happening in Furyville. I went out on an SKCC blatt last weekend, there were two planned, the weather looked better for the Saturday one, so I picked that.

It was drizzling as I stepped out of the house, but the forecast had been for dryness, so it must just be the last of a shower passing over yes?

I'd looked at the route the night before & it began at one of our regular haunts, then came towards Guildford, so I elected to give the neighbours a lie in & meet the route in Shalford. Except that I woke early so I set off. I got as far as Dunsfold parked up & sent a text to say I'd meet the others there. Then the drizzle started again, so I sent another text to say I'd amble along the route to keep the wet at bay. Just before I got to Bramley my phone beeped, "ah" I thought "confirmation". I pulled over & read the message, it said "I think you may have the wrong No." I'd sent the messages to "GB", I should've sent it to "GB SKCC".

Sorry 'bout that GB.
Shortly after that, the other two of today's runners passed the layby I was laying-by, so off we went. After a few miles our leader's SatNav went a little odd, so I took the lead - generally when I'm leading something goes awry, usually I go off piste & end up at the back again, today it was a rainstorm, a real, proper hurling it down type rainstorm. After a while I pulled into a petrol station to take cover under the canopy. Only here did I think to remove the rear facing camera - then I put the roof up anyway.

The rest of our jaunt was conducted with tops erect (unusually all the cars on this run were equipped with screens & hoods) & by & by we arrived at "the chalet", where we breakfasted & bantered. 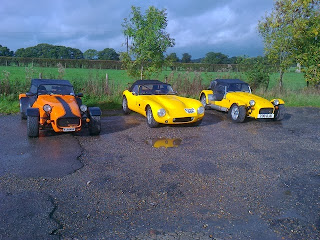 On arriving home I mopped a decent amount of water out of the car & took the roof & all the blatt gadgets into the house to dry. The rear camera had not fared well.

Water ran out of it.

I believe that expert opinion suggests that this is "not a good thing" for a camera.

I took the covers off each end & laid it to rest on a radiator. A couple of days later it was still not responding to prodding. It was only £14, so not a huge blow & now I have my GoPro (or will have come Christmas) so the failing BlattCam would be called to rear-facing duty.

BUT, now almost a week after it's dunking, the rear camera has come back to life - hurrah!

Next outing is the rememberance day run, so fingers are crosser for better weather for that.
Posted by BlatterBeast at 18:03