Having fitted & been impressed with the Day Running Lights (DRLs), they show up pretty well as you can see in this video still from "Bluephil1978 from the SKCC:- 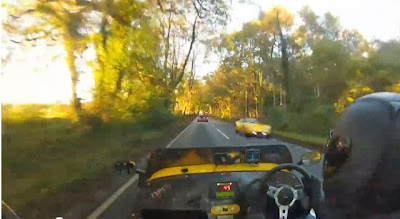 Though obviously not that well from the Nissan 4x4's point-of-view. It occurred to me that I could use the same thing at the rear as reversing lights. Up until now I've avoided reversing lights as I felt they would unnecessarily clutter the back of the car, they were not required for SVA & aren't an MoT item, though I believe they are now an IVA test point - but I don't need to worry about that.

Anyway - when building the car I put a wire from the dash to the gearbox switch & another from the switch back to the rear lights just in case I found I couldn't live without them. 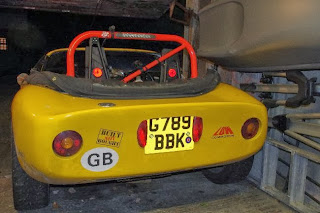 So here's a photo of the back of the car with the new reversing lights fitted ........

Can't see them can you? Good, that was my plan.

The lights are "light bolts" a thing that's really only been possible with the advent of modern high power LEDs, they are effectively a bolt with the LED in the bolt head & the wires running up the centre of the bolt shank. After the Remembrance Day Blatt, I fished the black & purple wire out from the rear light housing & re-routed it through the existing rear fog / No. plate light wire conduit into the centre of the boot space, fitted some terminals, modified the existing earth & Bob's your uncle.

Here they are working:- 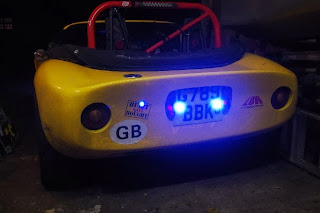 Yes I've used them to hold the No. plate on (the other bit of light on the "Built Not Bought" sticker is a stray reflection in the camera lens.

Last night I took the dash out & found the coiled up wire at the front & soldered it into the fused supply for the DRLs, so with ignition on & reverse selected they work - hurrah!
Of course I still can't actually see behind me because the harness stops me turning round & the mirrors are next to useless, but that's a problem for another day.

Granted they don't look very bright in this photo - that's because they're fighting with the flash. 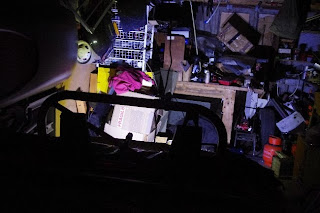 But here's a picture with all the garage lights out & the flash turned off. As you can see they're bright enough to illuminate the general clutter at the back of the garage, so I think they'll do the trick.

Invisible reversing lights - what will they think of next?

Speaking of being invisible, the video clip of my "near death experience" has now had 3,500 views in four days - it's gone viral!
Posted by BlatterBeast at 18:53