Up with the lark again, so I ambled down to set up the car before breakfast. That done & with the SKCC beginning to appear, I had a hearty breakfast, collected the rest of my bags & repaired to the car park. There was a great deal of “bonnet off action” going of as people checked oil & water levels & all those other things we never bother doing to our tin-tops. 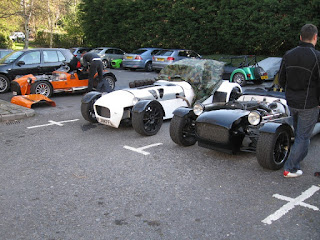 I thought I’d fire up the Fury just in case the starter had a problem. It didn’t, it fired, but I noticed the volt meter was low & the idiot lights on the 12v power sockets were low as well. Something was amiss.
Having called in a person or two, I quickly established that the alternator wasn’t charging, there was no “alt” light on the dash. A spare alternator was produced, but that had the same symptoms. A great deal of head scratching ensued, but in the end, Ash triumphed over a problem that would've seen me on a truck home, by jumping the alternator exciter lead straight to the battery & that worked.
So off we went an hour late. We passed through some wonderful Derbyshire towns & villages & drove down & then up the spectacular Speedwell gorge, as well as the “Cat & Fiddle Road which now has a ridiculous 50mph average speed camera system on it. I say ridiculous because it has some very tight bends meaning you can go really quite fast on the few straights without breaking the 50mph average. 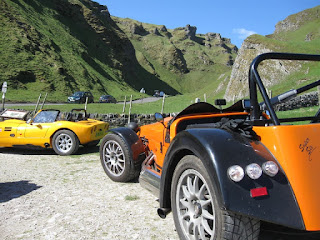 It was during the coffee stop when I lifted the bonnet to unplug the ignite wire, that I realised that my bonnet hinge has broken in exactly the same way as the Mango’s had. A couple of freshly drilled holes & beefy tyraps made it safe (if not actually convenient) but what with one thing & another my heart was then really not in it after that.


Until the PM coffee stop at least, After which I kind of woke up & the last bit of the day involved driving up Horseshoe Pass – A place I remember from my 10th year, when we had a family holiday to the area. I remember it because my Brother took his Mk1 Cortina which in a stifling day, over-heated on the climb. He did that thing one should never do & took off the rad cap while the engine was hot. He had a red face for the rest of the trip. 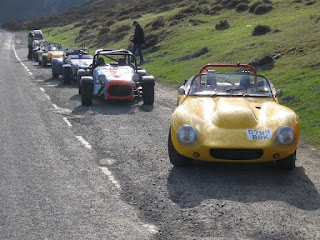 Today however would offer no such embarrassment, as the Fury simply LEAPT up the twisting road. My self & Mr Mango parked up at the top to admire the view & take some photos & after not long at all, an growing roar & some brightly coloured specs on the far side of the valley suggested the imminent arrival of more of the SKCC. They duly arrived & parked up, taking in the vista laid out in the sunshine before us.


After that, I lead the charge back down the far side of the pass & along the wonderfully twisting (& deserted) road back to the hotel. 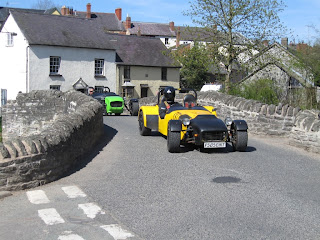 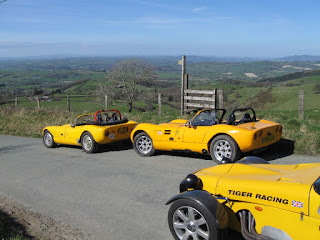