Up with the lark – actually a full 1/2hr before the alarm went off, so plenty of time for a coffee & a couple of left-over chocolate croissants, move the car on to the drive & take a few photos.


Just before the appointed hour I fired the engine & headed out to the north-western out-post of civilisation that is Basingstoke. Arriving at Mr Mango’s in plenty of time, the Mango-fury was coaxed into life & we headed north. The rest of the SKCC were heading round the eastern half of London which would’ve added quite a bit to my journey & a huge amount to Mr Mango’s, so we elected to pass London on the left-hand-side & make straight for the first coffee stop. We were quickly joined by Mr & Mrs Florin & ChrisL, then the rest of the SKCC’s eastern contingent appeared. 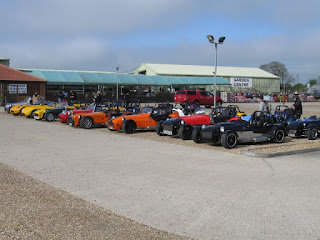 Mr Mango had a cunning plan to modify the official route, to take in a few extra sites, so I’d loaded his route into the SatNav & this pairing lasted oh – about 20 seconds. The trouble with SatNavs it that they know where you are, but not which way you’re facing, so on pulling out of the coffee stop, I went the wrong way.


No matter, I found some other running mates & we chugged along happily, but one by one they turned off, following the official routes & I was left on my own. After a few miles I decided to “sod this for a game of soldiers” & pulled into a farm track for a wee & to reload the “official” route. The trouble was I didn’t know how many way-points to delete. Then Mr Mango went past.  I hastily re-re-loaded his route, then I had the same waypoint problem, so just deleted the first two pages & off I set. It took me 30 miles up the motorway & completely skipped the lunch stop!


However, all was not lost, as I then encountered Kenton – strangely – in a petrol station (he has a V8 seven with a legendary thirst) & a few more popped up while I was paying. However, as soon as we set off we were in trouble. The roads had all changed & in next to no time we were delivered back to the petrol station. Oh how we laughed. 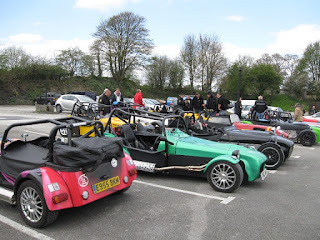 Deleting more another waypoint solved that one, but by now there was only myself & Our Leader, & soon, we’d lost touch as well. So it was a lonesome Blatter that rolled up to the PM coffee stop – still thinking it was a lunch stop, but at least all the SKCC were there as by this time we’d been joined by some of the more Northern members, but were missing one member – one GBSpark, who’s engine had moved the the extent that it split the thermostat housing. Particularly bad luck as on day one of last year’s road trip he suffered another water related out when he was forced to retire with a blown head gasket .


We headed into the Peak District, the next exciting thing was that one of our No. broke a throttle cable, soon our mobile repair man & all round guardian angel Locost 220 appeared & after a frantic ½ hour during which an unfeasibly large array of tools appeared from the apparently small confines of his car, a repair was effected & we were off.
Shortly afterwards we rounded a corner in a small, stone-built town, to find Mr Mango & Our Leader nestling in the kerb. Our Leader’s car had stopped & the high pressure fuel pump was getting the full force of a collective “hard stare”. The problem was traced to a blown fuse & while friendly locals came & went, the fault was diagnosed & mended. We set off – for perhaps a ¼ mile, when it did it again. More hard stares, more friendly locals, another fuse. I was the last into my car & when I pushed the starter button, there was what can only be described as a “CLACK” followed by silence. 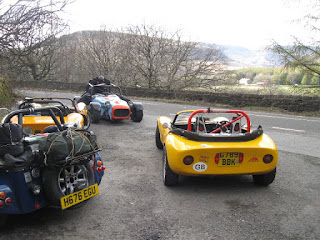 A couple of the afore-mentioned locals helped me turn the car round to point downhill & it bump-started easily, so I sped off in pursuit of my comrades. I found them pretty easily  - at the side of the road, next to Our Leader’s car, holding another blown fuse.


This time there was to be no messing & the seemingly cavernous depths of Locost220’s car produced not only reels of wire in a choice of colours, but terminals, PVC tape & a crimping tool. Soon the system was re-wired & while I fended off what must be described as the-local-loony who appeared with a broad grin next to a bright blue car, one in pale blue & orange “GULF” colours & two in yellow & announced “THAT’S HARRIETS FAVOURITE COLOUR!!!!!!!!” (she actually said that many exclamation marks!!!!!!!). 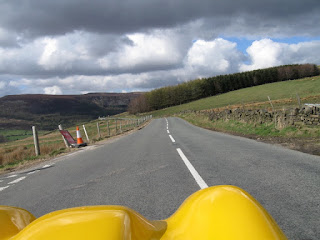 Having had a chunk of the wiring loom by-passed (properly I hasten to add, with a relay & in-line fuse, Our Leader’s car burst into life & again we set off, now very weary, for our hotel. The roads we travelled were serpentine, but also VERY rough, which jarred our aching bones somewhat. We found the hotel, Our Leader’s car kept running, some of our contingent even had the energy to go hunting for curry. I & a select few had a shower & ate a bar meal.


So, roll on tomorrow when I’m quite expecting to see Locost220’s car produce a two-post lift, a lathe & a medium-size wind turbine to power them.
Oh – there was some fantastic scenery too.
Posted by BlatterBeast at 19:37