Not a lot of Luck Going On

So! What's been happening since the road trip. Well, mixed at best really. When I got home I just put the Fury into the garage & bathed in the warm glow of not-coming-home-on-a-truck. but by the following weekend I thought I ought to be doing something to fix the couple of problemettes that had come up on the tour, namely:
The bonnet hinge - broken
The alternator exciter wire - not exciting
The starter - still shrieking & graunching

The natural first job was the bonnet, so off it came - it seems like the welding wasn't done very well, so I dropped the frame into Ashby Welding of Church Crookham with a request to re-weld the broken end & weld u both sides of the other end. But I'm getting ahead of myself - with the frame off there's no real way of attaching the bonnet, so I'd placed it on the car. Then daughter-the-younger wanted a lift. Could I find my glasses? in desperation I took off the bonnet again - forgetting the new one is noticeably heavier than the old one - & fell over, dropping the bonnet on the concrete with a rending crunch. I may have said "bother" or somesuch. Upshot is my shiny new bonnet now has a series of deep gouges & an area the size of an egg where the gel-coat has come off altogether. I have lumps of skin missing off both knees & one elbow, but I'll heal, the bonnet won't. 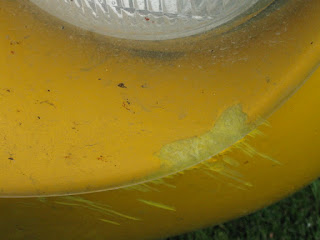 I picked up the Bonnet hinge yesterday - I'd said I'd need to pick it up lunch time - it hadn't been started. Well, it had in a way - they'd re-made the bit to be welded on as they'd lost the old one, then they didn't weld it both sides like I asked (sigh). So I fitted that back on the bonnet, then got distracted & fitted the spot lamps. The car had a pair on the old bonnet, but I'd got better ones, so fitted them in a similar place, surprisingly that went well, I fully expect them to catch fire when I switch them on. 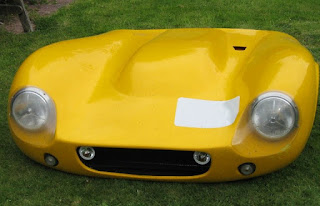 Today my plan was to remove the engine, swap the (probably) flimsy alloy bellhousing for a cast iron one, re-fit, test with the starter all would be fine of course, re-plumbed the engine, job done. It was not to be. A grisly scene awaited me when the engine was lifted, the ring gear the starter engages with is badly worn, battered, burred & basically no good at all.
Now I have a dilemma, fix it for the least cost, or replace things to make them better. The mondeo clutch is fierce - apparently because the clutch fingers pivot in a different place to the Rear Wheel Drive Pinto clutch. I would be good to fit a lightened flywheel that takes a pinto clutch & sort out a couple of problems at the same time. Adding to the complexity of the conundrum is that I'll be working abroad from Monday, every Monday to Thursday, which limits the amount of time I can devote to it.

Life, never easy is it. Better that the alternative though I suppose.
Posted by BlatterBeast at 18:52