The plan was simple - the best plans always are. 1/2 doz blokes with open cars meet up in the early early morning, go for a drive through some scenery & eat a hearty breakfast by the coast. Nice.

The first thing to go wrong was the weather, the Met Office was forecasting three spots of rain, the most there can be apparently, but in a wide circle, outside our area-of-interest. The next problem got me up at 04:20 with shocking heartburn, but it seemed dry at least - until I sat down with a hot drink, then the precipitation alarm - otherwise known as the conservatory roof - thundered into life. I decided I'd cancel. Then I decided I fancied taking the car out, & it wouldn't keep up this level of deluge for long. I went back to bed, but still couldn't sleep, so at about 06:30 I set off for the meet point - having changed my mind back & forth at least another five times.

It was raining, so I swapped the deflectors for the full side windows, put up the roof & headed out onto the dark. Pretty quickly I realised what I was up against & just how good modern cars are in inclement weather. The Fury was reasonably watertight in kit car terms - from the rain at least. The real problem was seeing & heading in the direction I was seeing.

Aquaplaning is a scary thing & the darkness & long bonnet meant there was very little indication of large areas of standing water until the steering went light & the brakes didn't work anymore. As you can imagine, I kept the speed down & was 15 mins late at the rendezvous. So having filled the car up with fuel & still the others hadn't arrived I assumed (wrongly) that they'd left. So I deleted a few waypoints from the route - intending to intercept them before the breakfast venue, fired up the Zetec & headed off - slowly. 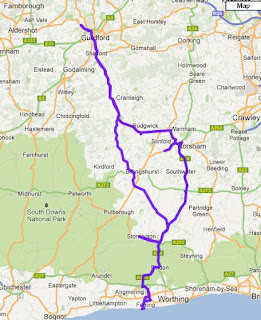 The gloom was lifting by now, but the hammering rain meant that large pools of standing water were indistinguishable from tarmac. I rumbled along a dual carriageway being overtaken by small hatchbacks & 4x4s, I was sure I could feel them smirking. Still being indecisive I turned round & changed my route several more times before giving up & plotting a course directly for the café.

The satnav had warned me it was on a gravel track, so when it directed me along a narrow unmettalled alley at the end of a residential road I was not concerned (except for my sump) & rumbled right to the end - where I found NO café & NO space to turn round. Reversing the Fury with a five point harness is a challenge normally, with the hood up, the side screens misted & the mirrors covered in rain, it was an impossibility, so I managed a 15 point turn & arrived back at the end of the alley, only to see a large sign saying "BLUEBIRD CAFÉ THIS WAY" pointing along the ADJACENT gravel track. A casual observer may have noticed my usual good humour failing at this point.

The new track led to a large gravel car park, at least I expect it was gravel. The parts of it that were visible above the water-level were gravel. I negotiated my way along a relatively dry(ish) bit, before being forced to take the plunge with some of the wider pools & arrived nose first at the café wall. Then - thinking ahead for once, I turned the car round to point down-hill. That way the water ran to the front of the foot-wells so it could be mopped out. The café was nice & the full house breakfast was warm & large, just what I needed. As I sat there eating the rain lashed at the window & ran down it at 45deg - and two joggers went past.

I sent a text to one of the SKCC:- "I'm at the café - where are you", the answer came back "surely you're joking". Having eaten, drunk, admired the view of the sea & taken as many serviettes as was seemly, I sallied forth. After mopping the floors, I once again attempted to navigate the wild waters of the carpark.

Making straight for home, I was now presented with a new hazard. Being much lighter (the morning - not me, I was much heavier) I could easily see the standing water, but so could the abundant 4x4s which seemed intent on submerging the fury, Time & again I had torrents of muddy water running UP the windscreen just after something had gone the other way. Also the water was no longer standing but going off on journeys of it's own, on several occasions I was following the turbid surface of what was presumably a road by looking for the regularly spaced "wakes" coming off the cats-eyes. I navigated these areas with a lot of throttle & very little speed. But to the Fury's credit, the engine never missed a beat, & the electric heated screen stayed clear in spite of the car filling with steam finding it's way in from the exhaust pod.

Finally I was on the home straight, but approaching Guildford, the traffic came to a halt, then moved a little, then a little more. After a while the cause became clear, a deep flood from kerb to kerb meant the cars were restricted to tidal flow. I inched forward with the engine racing & predictably a gaggle of 4x4s came the other way at 30 sending white (& brown) water cascading up the screen & slamming into the side windows. Nice.

I got home safe enough & pretty dry except for my turn-ups which had made a sterling effort to soak up the water in the foot wells, but I still managed to get another pint out of each.

Hopefully the car will have dried out by the next time I see it on Thursday. I'll have to give it a good coat-of-looking-at to see if it's come to any harm.

The video from this adventure is here should you ever decide that "Titanic" wasn't enough watery disaster movie for you.