If any of you watched the YouTube videos, you may have noticed a heavy knocking when the car is moving slowly. It's the exhaust tip hitting the pod as as it exits. The exhaust runs through the nearside pod, which keeps it tidy & hidden, but is a git-of-a-thing to engineer nicely. Anyway, since the Zetec went in it's rattled. Time to do something about it. The solution was a couple of rubber mounts attaching the tail pipe to the side impact frame, easy enough to sort, but in getting it all tied down nicely, it's moved a little, added to which there's a tell-tale burn - rub on the inside of the pod with a matching crack on the outside, so the rear of the silencer is touching the pod as well.


Moving the silencer isn’t really ideal as wherever I put it, it’ll louse up the run of the pipe past the side impact protection. I decided drastic action was required & decided to attempt a fairing in the side of the pod. But what to mould it on? It had to be a female mould (fibreglass component on the inside), I could spend ages carving wood or foam, but my eyes fell upon a semi-disposable food tray we bought for some event or other. It’s aluminium foil, but thicker than kitchen foil. I started working it into a dome with my fingernail– resulting in a smooth polished nail the TV ads would be proud of. I finished off the shape with a teaspoon (yes really) & gave it a coat of furniture wax.
Then to the garage, I made up some gel-coat (using the prised kitchen scales - shhh) & laid that on the wax, a little heat to cure it, then a couple of layers of chopped strand. So far it was all going quite well, no failure to cure, no bright yellow sticky hands, it was strange.

After a little more heat, my patience gave out - as it will on these occasions &I peeled off the foil tray, & because my new fairing was still “green” (flexible) I duct-taped it to the side pod, to take the shape. So far it looked good, but my fingers were firmly crossed. 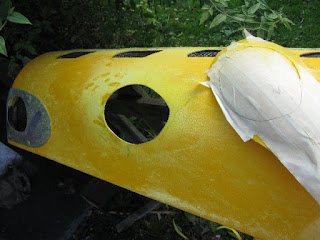 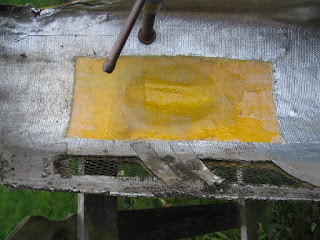 Phew - sounds easy doesn't it? Doesn’t look half bad though I say it myself, & it fits pretty well, hopefully it may even provide enough clearance. In the last picture you can see the extra “filler” resin needs a lot of cleaning up, but it shouldn’t be too bad, most of the time this area’s covered in mud anyway. 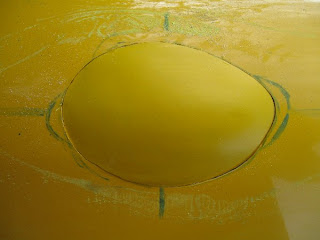 So the fairing's bonded in place, there's a little yellow gel / resin run into the gap (less that 1/2mm at it's widest) & I just need to cut that back & polish & it's all done. Well, except I need a new exit plate for the tail pipe. But it's nearly all done.
Posted by BlatterBeast at 16:48