In 2012 Armistice Day & Remembrance Day coincided, which made it a bit special.


Last year the SKCC attended the Remembrance Day service in the little village of Pulborough. There was no reason, other than Pulborough appeared to “do it right” & had enough parking. When it was suggested that the SKCC show it’s appreciation of those who gave by rocking up in noisy, brightly coloured cars & effectively gate-crashing someone else’s solemn moment, there was understandably a certain amount of scepticism that the effort would be appreciated. However, the SKCC was not to be cowed by such negativity & duly rocked up.


The effort was very much appreciated but the small number of Pulboroughrians in attendance, so this year it happened again & I joined in.


The sky when I left home was clear, one of those times when although the moon is new, you can just make out it’s full circle, Venus was very bright just to the left. I had forgotten to pick up my gloves from the wardrobe, but found an old pair of ski gloves in the utility room. Oh boy was I glad I did as I motored along the M25 – at 70 – with the roof down.


The SKCC met initially at dawn in temperatures only just above freezing. After the arrival of a couple of new members, looking somewhat stunned that folks would choose to drive open cars in these conditions and then the usual chat, banter & downright insults, a dozen engines fired & we headed off into the dawn. 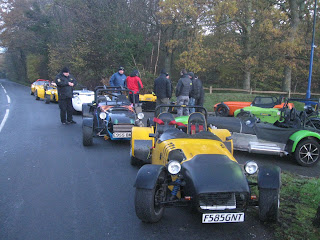 Conditions under tyre were best described as “variable”, which made utter concentration a pre-requisite, my blatt-cam mounted high on the roll bar records the application of a little opposite lock on a few occasions. I can’t say I’m confident at that sort of thing, but I kept the car out of the hedges, so I guess that’s good enough.


But we were in for a treat. As the sun came up, it sent crisp new light through the roadside trees, barring the early mist with brilliant white & pale shade, igniting the autumnal colours remaining on the trees & flickering at the edge of vision. Not a cloud was there in the brilliant azure sky.


One of our number suffered a little unreliability, one of the new starters was having a problem or two with his straight six Spartan. To be fair it was a recent purchase & needed a little “fettling” to be fully serviceable, but top marks for pitching up & top marks also for nursing it to the breakfast stop. But I’m getting ahead of my tale. It’s normal for the long chain of inappropriate cars to become broken up, as overtaking manoeuvres & junctions disrupt the continuity, but today, unusually, the band of blatters kept re-forming. A number of times I was driving with nothing in sight ahead, only to roll up at a junction behind a clump of Sevens impatiently waiting for the lights to change.


So it was that for once we arrived at “the Chalet” pretty much together & bang on schedule at 09:00, which inevitably made for something of a queue at the counter. But as usual the excellent – though not entirely healthy – breakfast arrived within minutes of ordering. More banter, more prodding of the new-comer’s cars. Then we headed off in formation for Pulborough. 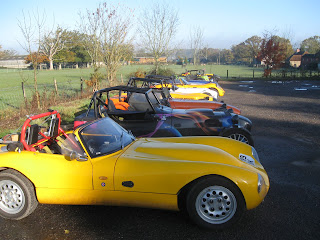 If anything the morning was now even more spectacular (fear not, I won’t be going all lyrical again) as the sun rose over hedge height the light & the colours were pretty special. We managed to stay more-or-less together & arrived, again bang on time at 10:45 at the church, rumbling as quietly as possible up the rough track. It was a slightly bizarre sight, gathered around the memorial were a few military types in full dress uniform & extremely well spoken & well dressed locals, stepping elegantly out of Range Rovers & Mercedes, then there were the scruffy oiks of the SKCC, dressed like ninja Michelin men, scrambling from the insides of GRP tubs. Were the locals phased? Were they upset? Not a bit of it. I heard a couple of very smart ladies say “look at all the bright cars – aren’t they lovely – they were here last year you know”. 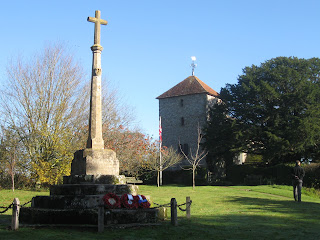 We ambled to the memorial looking not unlike a bunch of naughty schoolboys in the headmaster’s office, the conversation & guffaws died away & the vicar began reading the list of the fallen, the repetition of surnames bringing home some families particular tragedy. Then a bugle rang out for the last post, & after two minutes silence, distant guns sounded, wreaths were laid – one by the SKCC’s own veteran & we retired respectfully. 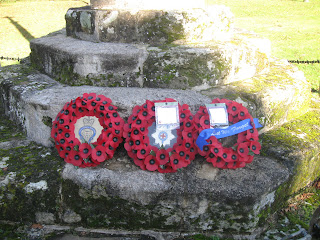 Then a VERY posh lady tottered up to us & gushed “You were here last year weren’t you, how wonderful ………… who are you?” our leader modestly answered “we’re just a car club” & we turned to go.


Once again starters whined (or graunched in my case) & engines crackled. We said our goodbyes & went our separate ways.
Quite a moving event & another great blatt.
THE SKCC REMEMBERS