So, what’s been happening? The Fury’s been out on it’s 1st club run of the season, this wasn’t a real blatt, just a pootle round the motorway to the kit car show at Detling, not a show I’ve ever attended before. The plan had been for the club to assemble at Mickey’s Diner for breakfast before rolling up en masse. I had all sorts of trouble finding the place with the satnav & eventually rolled up at 08:45 in company with another clubster who I failed to recognise because his car was so different from last time I saw it (better I thought, the off-set scoop over bike carbs giving it a most purposeful look). 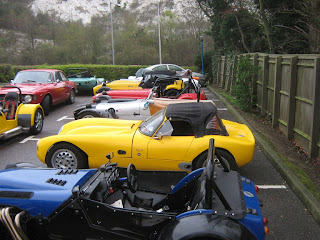 Slowly (well, with long spaces between arrivals) more of the SKCC turned up until we had completely filled the carpark. Breakfast was good & we attempted a convoy to the showground, but inevitably that fragmented into two or three chunks before we’d even left Mickeys.

The showground itself is an ex airfield, so is inevitably cold, windy & wet, but the cars were arranged in a carefully considered “random” fashion & the banter began. Lots of people were interested in the Fury's latest incarnation having read about my trials & tribulations in this very organ, & the bonnet was up & down like the proverbial whore's drawers. The comments thus garnered were more favourable than at the rolling road - which was nice. 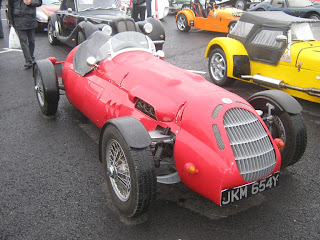 The show was small, all being contained within one largeish hanger, the usual suspects were all arrayed, but for me the greatest interest was on the club stands – here the standout cars for me were the home-built ‘30s racer looking car that I’ve seen at Stoneliegh, the twin engine Tiger, & the heavily modified Ranger in the main hall, with a Zetec & a 4” suspension drop – only because I know how much work must’ve gone into it.
Then after a cheeseburger & coke it was time to head for home – with the roof up & sidescreens on unfortunately. Not an exciting first outing, but the car was reliable & achieved 35mpg, which at this stage of the game I’m pretty pleased with.


In other news, I’ve made great strides with the cold air intake. The duct is just about complete & ready to bond to the bonnet – so wish me luck, this could get messy.
Posted by BlatterBeast at 11:36