Yes dear reader I have been remiss in updating this missive, but I've been busy you see.......


David (the navigator) turned up dead on time, & as there were a few spots of rain we put the roof up, wisely as it turned out because the rain started properly as we were leaving, but we drove through it & the skies were blue by the time we got to the meet point near the tunnel. 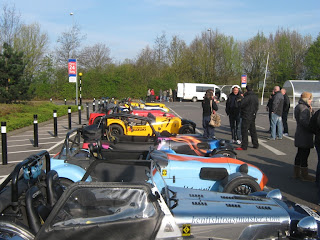 Getting on the ferry was relatively smooth in spite of the last minute change of car & it turned out the couple we stopped behind live only 500 yds from where I work, & his car had only been on the road for a month too - though his was all new, not just the engine. Rolling out of the tunnel we assembled into three groups of four & set off, we were not going straight to the destination, but heading south west along the coast (ish) to take in some scenery & have lunch. I made the first faux-pas at a tee junction when I was about to pull out to turn left when David shouted "HOLD ON, HOLD ON" I hit the brakes just as a small white van slid past the front of the car with it's wheels firmly locked & the passenger GLARING at - well - David actually as he was on the "driver's" side of the car. Lesson learned - from then on we said "left clear & right clear" at every junction.
The roads were quiet to the point of being post-apocalyptic, where DO the French go at the weekend? We made good progress, but lost our group when my car lost power just after a short stop to "commune with nature" (the women in the party chose to wait). All it needed was a sharp tap on the low pressure fuel pump, but by the time I was out of the car & strapped back in, the others were beyond catching. Strangely though, we arrived at the lunch stop first, a pretty village on a wide estuary, think of it as a very French Padstow. The other cars rumbled in & we sat outside to eat. The majority ordered the only thing we could confidently say in French - cheeseburger, & they duly arrived covered in something that looked suspiciously like custard, but was in fact some form of "cheese-in-a-can", it was pointed out that the menu stated "cheese" not "fromage" so that might explain it. A few of the crew were more ambitious & went for mussels & were rewarded with an entire saucepan full each. You could've re-cobbled the high street with the empty shells. After another thirty-odd miles of wonderfully winding roads we reached the hotel & parked up for the night. 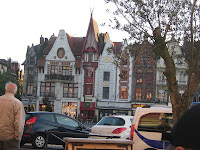 A taxi was ordered to take the thirty of us into Bethune, & sure enough it arrived, I say it, presumably Bethune has only one taxi as he shuttled us into town six at a time. The town square was again very French & we sat around drinking beer & eating pizza before calling the now very grumpy taxi driver to shuttle us all back. At some point in the wee small hours I was woken by people shouting English, then later by wedding party stragglers shouting in French, then at 05:00 (04:00 UK time) I woke & couldn't get back to sleep. So it was a fairly jaded Tony that was taking the roof & side windows off the car & re-fitting the luggage rack at 06:00. Breakfast in the hotel was a buffet continental affair, but very nice all the same, though the non-English speaking girl on reception didn't think we'd pre-paid for breakfast & we had trouble insisting in French that we had. 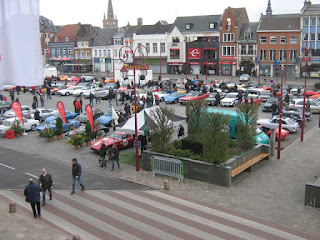 So we set off for Hazebrouk, another old town based around a square, where we were given another breakfast, in the very posh town hall before setting off. There were about 150 cars on the rally, all parked up in rows in the town square, so we were called in car number? One row at a time? No, it was all very European, there was a total (but good natured) melee, & whichever car fought their way to one of three exit points first, got to leave first.
The rally itself was based on a "roadbook" of some 50 sides of A4, with five or six pictorial instructions per page, with an additional twist of cards laid by the roadside with letters & numbers on, which had to be written on a sheet. At one point I was following another of the club's cars when I saw this small card just as the other car's brake lights came on:-
"was that a card Tony"
"yes"
"what was the letter?" I'm thinking, this is a competition - you're going to take my word for it??
After quite a lot of miles & many three point turns, we reached the first refreshment stop, where tokens could be exchanged in a hostelry for coffee, hot chocolate, lemonade, beer or wine - imagine that on a motoring event in the UK. Another picturesque town awash with keen photo-taking locals.
After this stop, more of the same, but instead of numbered cards, we were looking for something that wasn't there. At the drinks stop we had been handed a sealed envelope with six photos, the task was to write your car number on the back of the one view you DIDN'T see on stage two. Tricky that. We only saw two of the views so guessed.On this stage the sky was getting heavier & heavier, eventually the sky opened & rather too late we made the decision to put the roof up. David volunteered to assemble the front of the roof while I did the back. This meant I was outside while the worst of the rain fell & David fumbled with the bolts. This was "refreshing", but we were soon under way again in a rapidly steaming-up car. This stage ended at a lunch stop, all the cars were stacked into a carpark in such a way that they could only leave in the same order they arrived. Lunch was a splendid affair, with each of us being handed a glass of wine on arrival, & sitting down on a decorated table for a proper three course lunch with a bottle of wine between every four people.
The final stage took us back to Hazebrouk, no games this time, just follow the route through more countryside, still with very little sign of any French except for occasional groups of waving small boys. There were a couple of "walking wounded" among the car club, one arrived with his exhaust strapped to the back of the car, another who had earlier worried one of the other drivers by asking for a spare clutch cable because his had snapped as a joke, had his clutch cable snap - that'll teach him. But we all made the Eurotunnel station on time & under our own steam. In my car we even had time for some tea.
Of course the worst part of the whole trip was the run for home, the blue skies through the train window on arrival tempted me to take the roof down, but my co-pilot cautioned against it & by then we were cold, very very tired & really couldn't be bothered wrestling with it. This was a good thing, because 20odd miles along the M20 the heavens opened in truly biblical style (out thoughts went out to those with no windscreens - & we laughed), we had a screen, we had a roof, but we hadn't bothered with the full side windows, & all the water off the front of the car was making a determined effort to get in along the rear edge of the deflectors. The rain soon passed though & we were slowed by recovery truck winching tin-tops which had had a coming together at the side of the road. So we made it home. The car had a problem or two - the starter had been iffy & there's a small oil leak at the front of the engine to deal with, but quite an adventure all in all. David the navigator then had another 45 min drive to get home, before getting up early the next day to fly - to Milan for work. I had booked the day off, just as well as I was completely "mind-blown", couldn't concentrate on anything at all.

So will I do it again? I think so, It'd depend on finding a navigator - ideally fluent in French. I have a great deal of video from the car mounted cameras which I'll be editing down & putting on youtube, so I'll post the link out when I've done it. 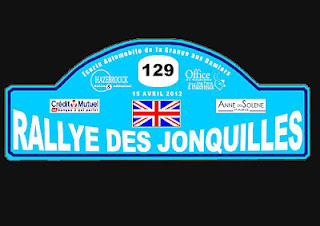