After a trip into town to pick up a jubilee clip, I arrived home & got it fitted, then moved on to the bleeding brakes - sorry, moved on to bleeding the brakes.

I attached a hose into a jar, I released the bleed nipple, pumped the brakes, closed the nipple, repeated on the other side, tested the pedal - no different. I found a step stool, placed the jar of brake fluid on the top step, so the hose ran upward to it & any air leaving the caliper would rise upward. Did both sides again - no different. I went through it all again - & then I started thinking......

They are Sierra callipers adapted onto an Escort axle with after market brackets. Aftermarket stuff is generally suspect, so I looked closely at the brakes & sure enough - the bleed nipple is not the highest point!

I removed the lower calliper bolt, slackened the upper one & rotated the calliper round it, then bled it again - I could hear the air coming out. Same trick the other side & the pedal was firm like it should be.

Next job was to cut down the filler hose & fit the filler back onto the rear wing, it's awkward, but not any real problem - aircraft fitters develop very bendy arms. 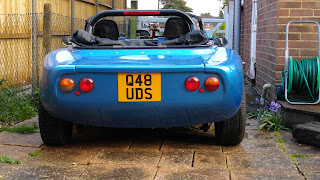 Then put the 2 gallons of fuel back in & check for leaks - there were none, but the fuel gauge wasn't working. A quick investigation concluded that it was working, but needed a tweak on the float. That done it's showing just under the 1/4 full with two gallons in, so I fired it up & drove it outside to a/ tidy the garage floor, but mostly b/ admire the new look of it's pert rear.
Posted by BlatterBeast at 20:52