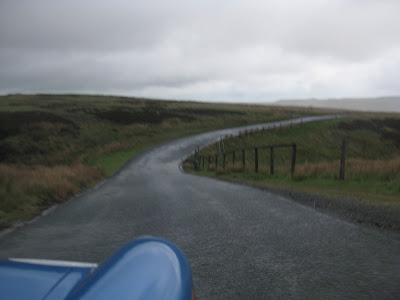 Named for whoever it was who went to Barnard Castle for an eye test, there was a short & a long option of today’s route. The weather looked better in the direction this run took, but it was still pretty wet up on the moors as we set off for Brough Castle Ice Cream parlour. Yes again – what of it? 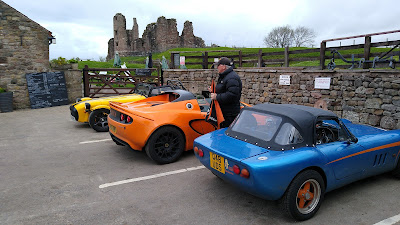 The first half of the run was marred not only by the weather, but also by ponderous drivers pootling along at 30 in a 60 limit, some of them on wide A roads. They seemed to be everywhere, but after a frustrating time we arrived at the cake stop & I had MY FIRST ACTUAL CAKE OF THE TOUR! It was raining very slightly when we emerged, but I elected to keep the roof off & was rewarded with a little sunshine, but no more rain. 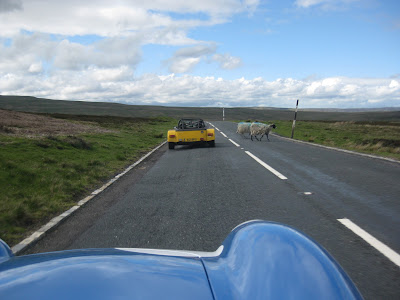 Myself, Brian (Caterham) & Neil (GBS Zero) made good progress & the roads were empty of all the dawdlers. There was some confusion over a fuel stop & we lost Neil, but Brian & I continued together & after a ford found “Colliary Lane”. It started well enough with a long stretch of smooth tarmac, then it wound down into a steep valley & the surface became a little more broken. Then as it climbed steeply up the other side, it was like driving on railway sleepers, I was laughing like a drain, thinking “there’ll be hell to pay for this in the bar tonight”, but the Stylus coped admirably, just winding its’ way up in second without issue. 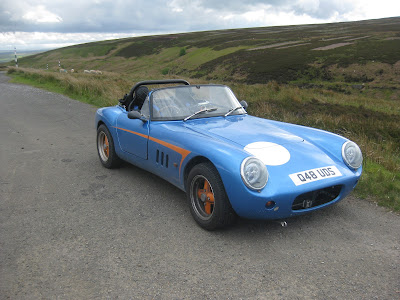 After that was a swift run over the moors following a Seat Leon that wasn’t intent on doing 30 – very definitely not, followed by a quick refuel & into the pub for tea & discussion of all our adventures.
Posted by BlatterBeast at 18:47