Today I decided to fit the new cam belt, I took the front off the engine, I took the top off the engine, I attempted to put the cam locking strip into the cams, but it wouldn't fit. The grooves for the locking strip weren't parallel - weird. I took out No.1 spark plug & took the piston to Top Dead Centre, checking it with a Dial Test Indicator. The inlet cam was OK, but the exhaust cam was 1/2 a tooth out. I puzzled over this for some time, but in the end I slackened the exhaust cam wheel & set it all up to the book.
But presumably it's been like that for a while as it's a Gates belt not a Motorcraft one, so it has been changed. 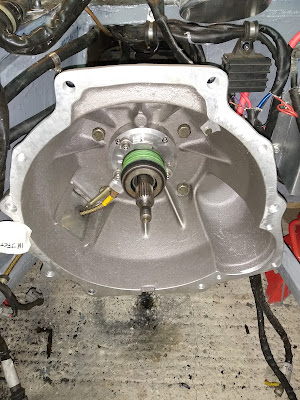 Then (drum roll) the bell housing arrived, it needed a mod or two - no disrespect to RWD Motorsport, it was sold as a "Sierra replacement bell housing" & indeed it is, but the Stylus has a Mondeo concentric clutch slave cylinder, so I had to remove a little metal overhanging the central bore & make up a blanking plate for the big square hole where the clutch fork goes. But that's all done & it's on the gearbox, so it can get bled through (when the reservoir is fitted) & the engine can go back in - HOORAH!
Posted by BlatterBeast at 18:51