Today the nasty jobs started. To begin with I tried to put it off by dismantling & cleaning the engine mountings, but they wouldn’t dismantle. I could see the nut holding the rubber mount on inside the steel tube, but it wouldn’t undo. I couldn’t even get a socket on the nut properly. There was a fair bit of rust & crud in there, so I tipped in some WD40 & left it for later.

That left me with only one choice, I’d have to start cleaning the chassis – unless – really I should take out the exhaust manifold because that would just be in the way. The bolt head on the Mikalor clamp was mangled, so I cut through it, unscrewed the Lambda & it came out pretty easily. So now I really ought to clean the chassis – but the battery tray should come off - & then as it was covered in flaky blue paint (everything in the engine bay is covered in flaky blue paint), I took it off the car & wire-brushed it back to the alloy, then sort of polished the wire brush marks out. 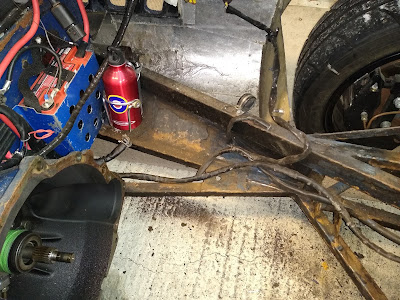 So, back to the chassis – although – the WD40 on the engine mounts should’ve worked by now. It hadn’t, I tried a number of different size sockets & none would engage with the hex, there seemed to be a lump of stuff at the bottom of the tube stopping the socket going over the nut. I tried chiseling at it with an old screwdriver, but eventually got bored & went back to the chassis cleaning – which wasn’t actually too bad. There’s no pitting & although the inevitable blue paint & black powdercoat underneath have cracked & allowed water in, it’s just a little surface rust, so I’ve cleaned a fair bit of the near side & when the engine is ready to go in......

- so I can move the old engine into storage

- so I can take off the front suspension & steering for access

– then it won’t be too bad a job to clean off the rest & get the surface prep & paint on.

When I’d finished, I looked again at the engine mounts & realised the lump of stuff stopping me getting a socket on the nut was weld – all I had to do was unscrew the rubber mount from the steel tube (sigh). I did clean them all up & cut off an old throttle cable fitting made from a piece of steel 1” x 1” x 2” – a solid block of steel welded on to the off side engine mount. Another bit of weight saved.