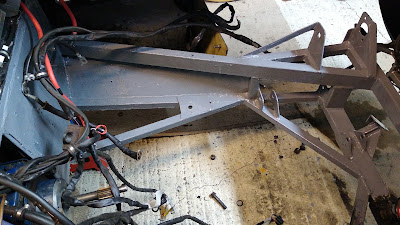 Half of the chassis refurb is kind of finished!

After what seemed like a week of scrapeing & cleaning - but was probably seven days, all the rust & paint was finally stripped & after de-grease & metal prep, a couple of coats of grey have been splashed across it. It doesn't look brilliant, but it was never going to, being a 20 year old chassis & looking good was never the point. 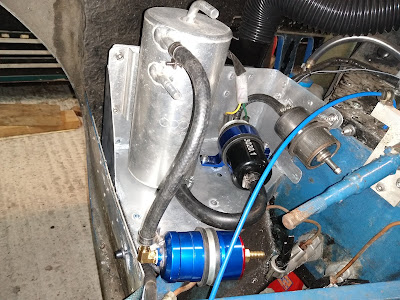 While that was drying I took a trip to Think Automotive & purchased a few fittings to get the fuel system sorted. It looks similar, but the tray has been lightened & stiffened, the hose & wiring runs are simpler, the filters are in the right places & it’s been de-blued.

I've added a fastner into the pedal box at the top because the whole tray was more or less attached in a single plane & although a stiffener had been rivetted on to support the swirl pot, it had been placed vertically so wasn't doing much, I've lowered the swirl pot & placed the stiffener horizontally & the swirl pot no longer sways about.

I just need to get the off side cleaned stripped & painted & I can start re-building! HURRAH!!