Been a bit of a strange day.

I started by fitting a tee in a hose so I can fill the cooling system - except that I can't because I'm still waiting for an adaptor so I can fit the fan switch to the water rail & a second fan switch for the radiator. But my main plan for the day was to find the cause of a couple of faults that popped up yesterday when I switched the ignition on. Firstly the green shift light came on, then I noticed the oil pressure gauge was right at the top of the scale.

I assumed the gauge was a wiring fault created by me when trying to wire up the brake microswitch - I tested the wiring & it all rang through, so I looked at the gauge. Putting 12v on the ign terminal & earthing the earth made the needle climb, so I e-mailed ETB Instruments who answered within the hour saying the gauge was fine, run these three tests to find the fault - excellent customer service! I ran the tests & it was a wiring problem, but not in the way I'd thought. I'd cut into the wire sheathing, found the black wire & linked to it - only to find afterwards that there were three black wires hiding in the sheathing & I'd found the wrong one. I connected to the right one & re-insulated the wire, but it now seems I'd blown the oil pressure sender. I've ordered another one.

The other fault was also of my own making (sort of) when putting the dash back in last time I must've caught a wire & pulled it out of the termination (not one I'd crimped I might add). The wire provided an earth for the ECU, so the shift light was on because that was the only way the power could earth. Crimp on a new termination, plug the wire back in & all was well. 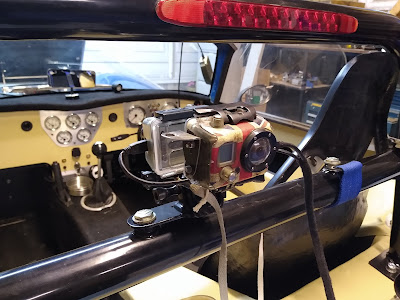 Then I started looking at cameras - the Fury had camera mounts all over it, the Stylus has less - but they're more "integrated" with back & forward facing cameras on the same bracket, plugged into the same socket. I may add more, The Fury had a mounting that stuck out of the side of the car when in use,which gave some very dramatic shots - but I did have to be vary careful not to drive it into stuff or trip over it when getting out. 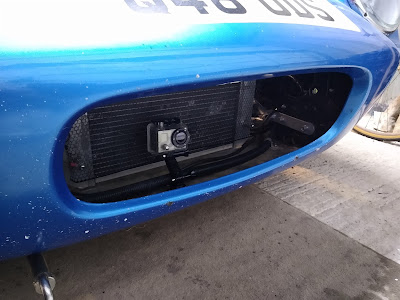 I've also fitted a third mount in the radiator intake for the dramatic low shot.

During all this busyness I noticed the tube light above the bench flicker, so popped into Screwfix & bought an LED replacement & fitted it - and watched in horror while the old tube slid s-l-o-w-l-y down the bench - just out of reach & smashed into a million tiny tiny pieces on the floor (sigh).

After I'd tidied that up, I adjusted the steering to (hopefully) straighten the steering wheel - not only was in not quite straight - which is both irritating & very "kit car", but the wheel is inevitably a "motorsport" type with the yellow bit at 12 o'clock, so it's REALLY OBVIOUS when the wheel's not straight. Doing that little job meant the car could come off the axle stands it's been on for a month or so.