There's not a huge amount going on in the garage at the moment, I have to keep all the cars mobile as I'll be servicing my daughter's car over the weekend, after that I can get serious on the Stylus. 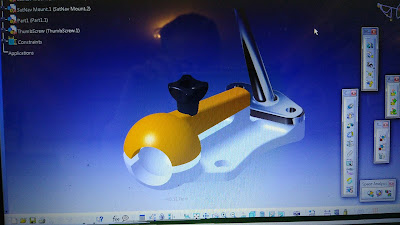 But this week I thought about the SatNav Mount on the Stylus. There isn't a lot of space for it. The screen is quite small, so I didn't really want it on a suction mount. I drew up & printed a mounting that used a RAM mount & although my bit worked, the rest of the RAM mount was quite cumbersome on the Stylus' dash, so I looked at alternatives & wondered if I could print something that would clamp the RAM mount ball. I drew up the top half & printed it & if felt promising. 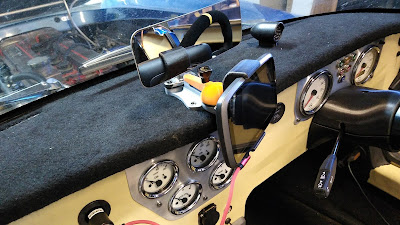 Sitting in the car I wondered how I could mount it & then realised I'd printed a plinth to raise the rear view mirror, could I integrate the SatNav mount with that? A little more CAD work & 4 hours printing & I have a mount which is secure & places the SatNav just where I want it, above the minor clocks, but below the mirror. I've not decided if it's a bit garish, I've run out of black filament so I might re-print it later.

I also recieved an e-mail this week from the nice people at EBC Brakes saying they had "Black Friday" deals on. Being a naturally cynical engineer, I raised my eyes to the heavens - but no! I looked up the XR2 brakes I needed for the Quantum & there were the vented discs & green stuff pads for £90 delivered, and the credit card bill had just closed, so I wouldn't be paying for them until the new year! 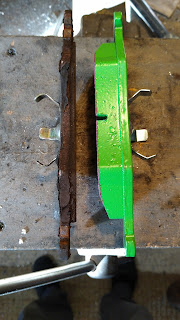 They arrived the following day - the doorbell rang & I walked round the house to see a large bear of a man with the brake box standing against the front door. "Thanks" I said, he sighed & said "the front door has to be open for the photo sir - so they know it's been delivered" It seems just handing it to the person it's addressed to is no longer sufficient! I went back round the house, through the house & opened the front door.

But they were all there in the box, & fitted beautifully, though looking at the old pads I was doing it not a mile too soon. >> That's a new green pad next to the old one that came off. I wondered if this is the first time the pads & discs had been changed since the car was built