Yesterday I fitted the exhaust & "knife & Forked" (bodged with style) the Mass Air Flow meter onto the intake so the ECU would get readings from it, so apart from the intake air temperature sensor (still on the kitchen worktop) all the engine sensors were fitted & working.

I turned the key & the engine fired straight away & ran smoothly - but (there had to be a but) it ran smoothly at about 3,000 rpm. I turned it off.

Suspicion fell on the Idle Speed Control Valve, I had put 12 volts across it when the engine parts came home & it reacted, now I put a hose in one side & triggered it while blowing. Much like the UK Government in the current pandemic, the ISCV didn't shut the ports when it should've. New ISCV on order.

Also on order is an alternator drive belt so I can have the cooling system running with the engine & so run the engine longer for tesing. 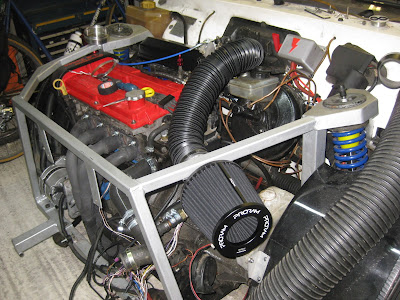 In the post today was an intake duct. I'm not sure it'll be staying, it was cheap & it'll do for now, but it seems stiff, so may well break or rub through, but I wanted some of the parts that came with it - we'll see.

So what's still to do?

The relay for the headlamp flaps needs bringing into the car - currently it's on the bonnet right in front of the front wheels getting wet.

The dashboardneeds putting back together.

It would benefit from some general tiddivating inside.

So, not too long before it's roadworthy again - unless the ISCV isn't the problem.