A fair bit's been happeing, mostly because I'm going to see my Dad on Boxing day, so as Covid is running riot where I live I've decided to stay in the house (& the garage). 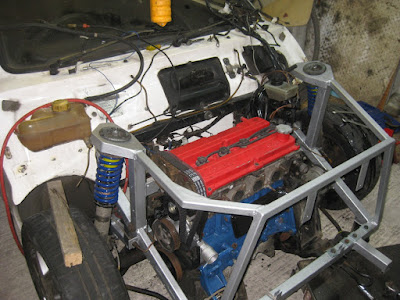 So progress has been made, firstly the engine is mounted - this was not as simple as I'd been led to believe, there is a bracket on the sub-frame that mounts the engine mount - it could not have been more awkward if Quantum deliberatly made it so, it's only an angle bracket with a horizontal face for the engine mount & a vertical one for support, so it really doesn't matter which side the vertical is, but it's on the forward side, so it got in the way of the wider Zetec head. 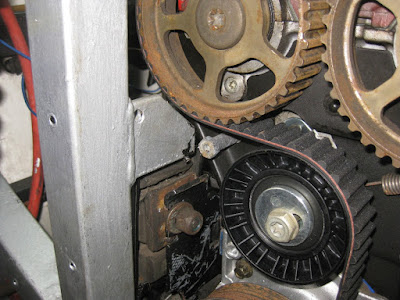 That is NOT a lot of clearance. I haven't trimmed it like that, that's just how it ended up.

The engine mount had been a git to get on as well, but I took it off, jacked the engine out of the way, covered it over with a rag & reached for the angry grinder with a cutting wheel. There was just enough space to get it in & I made vertical cuts, levered the slices out with a mole wrench & cleaned all the edges up 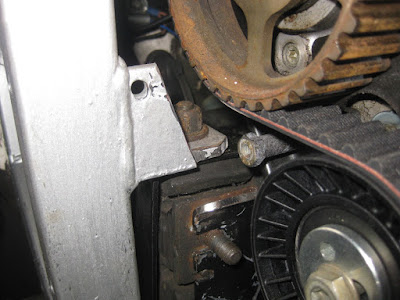 This was better, I've taken a little more off since & now have the plastic cam belt cover on. It was during the repeated removal & replacement of the engine mount that I remembered I own a borescope. The camera is 8mm dia & the mounting bolt holes (tubes) are 11 so it was easy to put the camera into a tube & jack the engine until the tube & the thread were aligned - then fit the bolt. This was much easier than trying to align it all blind.

The next job was to go around the engine bay fitting other bits & tightening bolts that had been just wound in to keep parts roughly in place during the fitting. I also renewed all the nyloc nuts holding the suspension on. 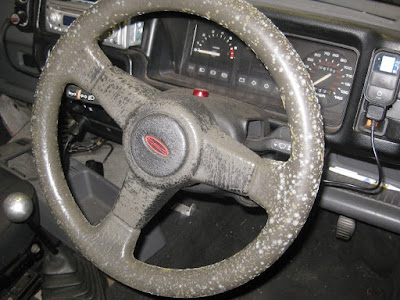 While I was walking past the car I noticed the steering wheel looked a bit - spotty. I looked closer, then wished I haden't, there's quite a collection of mould there, yellow and white! 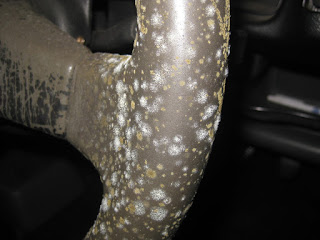 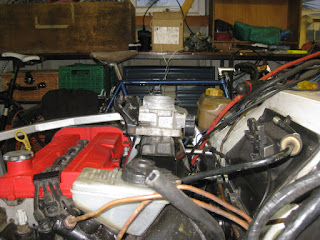 I then looked at the inlet plenum - the one I was complaining about a couple of weeks ago. It's all a bit sad really, as built it won't fit (even if it would fit on the engine - which it won't) the right way round because it hits the suspension tower, my plan had been to cut though the runners & flip the plenum the other way up so it pointed out over the gearbox - no, then it hits the brake servo. My next thought was to block the inlet off & fit the throttle body to the top, like it is dead centre of this photo.

Now I've always fancied a car with an air filter poking up through the bonet, but I really don't think the Quantum could carry it off.

I'm working up another plan which I'm hoping will work. 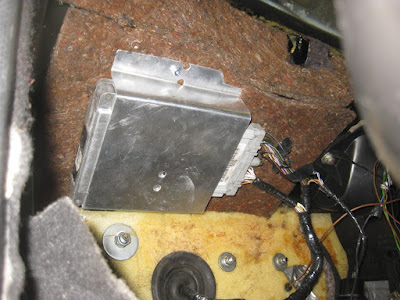 Today I've been looking at the electrics & have fitted the ECU on the front bulkhead with an improvised bent up bracket, not very pretty, but it's a LONG way out of sight, it was really awkward to fit the bolts but I got there in the end - I just hope it works because it's pretty damn inaccessible if I ever need to get to it. 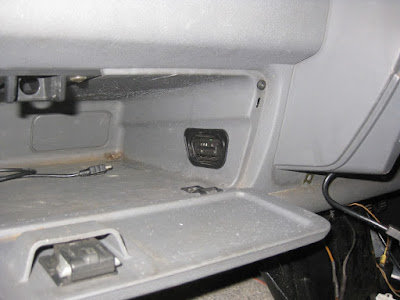 As a finale, I fitted the OBD port into the glove box wall.

A kit car with an OBD port - what ever next??