I think I've worked out the correct shape for the plenum to get the throttle body ("TB") to clear the brake servo & point the the air intake somewhere towards the front of the car. This has mostly happened because it's too cold in the garage & I can do CADing in the house. The pic to the right is the plenum with a very roughly modeled TB on the right hand side - the viewpoint is more-or less standing in front of the car looking down over the engine. At the right hand side the plenum has been cut on a compound angle (an angle in two planes) to tip the TB forward & up to clear the brake servo. 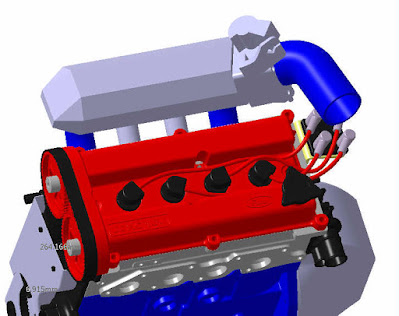 If I'd made the cut at two angles, the shape would be difficult to transcribe onto the plenum for cutting, so I used a plane controled by three points to cut the CAD model, each point is a measured distnce along one of the folds, so marking out is easy, draw on the points, roughly align them & join with a pencil line.

This is how it looks on the engine. It's not precise, but there's "wriggle room" by adjusting the length of the legs in the silicone hoses connecting the inlet runners to the plenum. A by-product of fitting the TB here is a nice smooth throttle cable run. 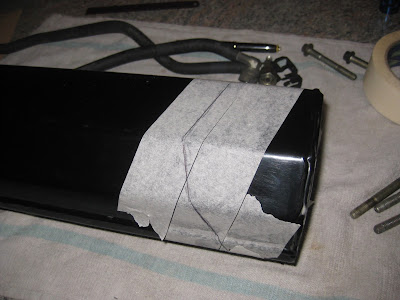 So here's what I mean - there's the cut line marked on the plenum & it's obviously not striaght. 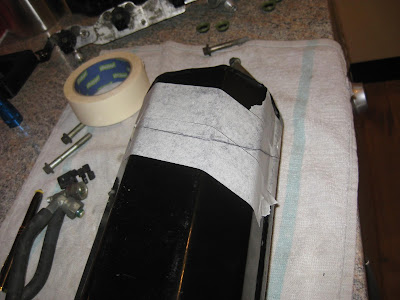 But seen from the other angle, it's a stright cut line! It's like magic isn't it?

When I'm feeling brave (probably after the silicone hoses have arrived & been test fitted) I'll slice down that line, cut some 1/4" plate to fit, tap four holes to match the throttle body & weld it together - OK, I'll get someone else to weld it together.

But if it works that's another major hurdle crossed.