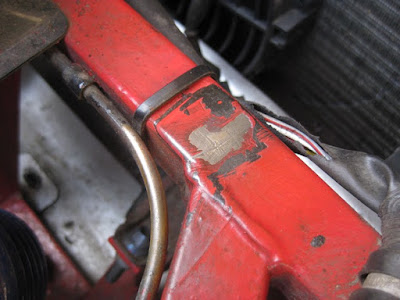 While I was looking at the car trying to find something to tinker with I spotted a line in the paint. I tried to convince myself it was jut a hair from the paint brush, but taking the paint off revealed a crack in the chassis front upper cross bar. I went inside & did some googling which established that it was a known issue on the racers & it was fixed by fitting a brace between the rear upper rocker mounts.

That's easy on a bike engine racer as the engine's so small, not so easy with a Zetec.

I made up a prototype brace from a piece of racking frame liberated from Dunsfold when it closed & it looked just possible to fit it in front of the engine. I cut some more tube & welded it together (& bolted it - I know what my welding's like) & with a few mods it was persuaded to fit - but it's close. I've had to swap the water pump pulley bolts for button heads so the pulley can go round - it's that close. Time will tell if it's far enough away. 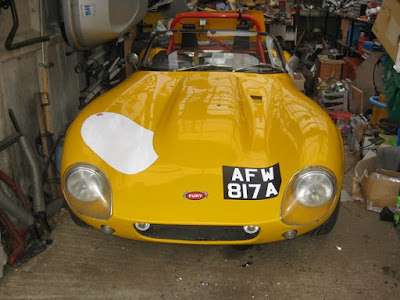 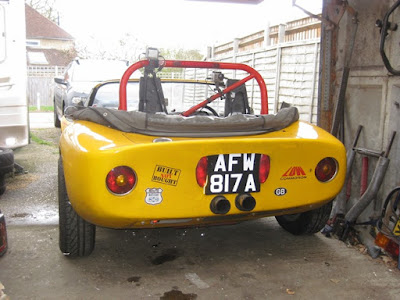 Also yesterday the new No. plates & V5 arrived, so the car is officially AFW 817A. I clamped the new & old rear plates together & re-shaped the new one so it fits, then I realised the left hand reverse light would foul the 8, so I took the lights off.


Tomorrow I'll look for a way of fitting the reflective plate to the front for MoTs & erm - road driving.

So I now had a pair of LED reversing lights & nowhere to put them.

I made up a bracket, fitted the lights & pulled the wiring right out of one of them - scrap.

Fortunately I've done this before & had to buy another pair, so I had a spare one - which is why the one on the right looks a lot more "used" than the one on the left.

Now I wired them all nicely & fed the wire up into the boot, then cut an area of mesh out in the centre & riveted the bracket on. It really needs a waterproof connector for when the valence comes off, so I'll order one & will have lost it by the time I'm ready to fit it.