Have I told you about the flip cap? Have I? Have I?

When I built the car I wanted a lot of aeroplane influence, so it got an aero flush filler cap. Things move on & the car now has much more of a '50s vibe & what with the boot lid being cut & submerging the filler, it was now looking a little - odd.

So the new plan was a flip cap. I'd had one on the first car I built, so it sort of harks back to that.

I bought the cap a month or so ago, but at 3/4 kg, it was obviously FAR too heavy, so the lock ring was ditched entirely & the neck was turned down to the max (or indeed min) & this resulted in a mass reduction of 1/4kg or 33%. So it's still a heavy item then.

I then needed a new way to mount it as I'd deleted the lock ring, so drew up a plate which would bolt to the underside, & would be bolted down through the new cake tin (more to come on that one) to the existing alloy fame structure in the boot, but the top of the cap should be about flush(ish) with the surface.

That was the plan anyway.


So the mounting plate got bandsawed out of a 5mm plate I had in the garage, hand filed to smooth the periphery, drilled & countersunk for the cap mounting bolts & then drilled again for lightness, then polished. Not shiny polished, scotchbright polished to match the cap.


Bolting it down needed bolts, so I popped round to my local nut & bolt emporium Margnor in Jacobswell & purchased 5 off M5 x 20 csk bolts for the princely sum of 30p (two of which are spares) & attached the plate to the underside of the cap.

Then realised I'd polished the wrong side.

Twenty minutes later & with both sides now polished, I bolted the mounting plate onto the cap & I saw that it was good. 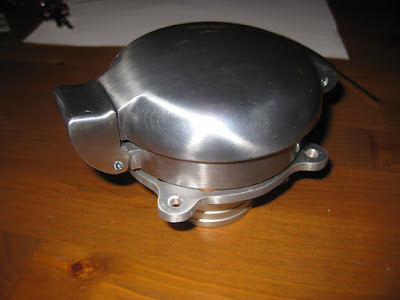 The next job will be to cut the new cake tin to fit the filler cap, then remove the aero cap & drill the support structure to accept the new cap / mounting plate / cake tin assembly & enlarge the hole in the boot lid a little to allow the flip cap to - flip.

After that I may need to modify the boot rack a little if there's a clash, but I'll deal with that as & when ..... 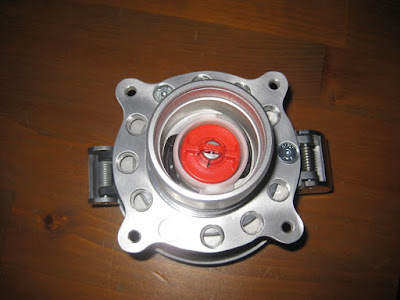