New For Next Season

It's that time of year again, it's almost the winter, the Fury will come off the road at the end of October & I'm planning the winter mods.

Highest up the list is a cockpit refresh, I've de-rusted & re-painted the rear chassis & the engine bay, so this year it's the tubes in the cockpit. that'll require all the inside to come out, so I'll be tidying the wiring & cleaning the carpets & maybe recovering the dash - but that's all dull. I also plan on some metal cutting.

As usual this has been preceded by some designing & drawing. Nearest to getting done is the fuel filler cap. Before the car had a boot lid I wanted an "aero-cap" as the car has some aircraft parts, when the boot lid got cut out, the aero cap was an inch inside the bodywork, so I decided to swap it for an Aston-style flip cap & last weekend, while completely failing to get to France (long story) I called into Car Builder Solutions & tried a cap for size. It's a lovely cast & machined alloy item the same as is fitted to modern Morgans - but - it weighs 3/4 Kilo!

Obviously I can't be doing with that, so plans are afoot to have it machined down & do way with one part altogether leaving it at a more respectable 580g. It should look like this:- 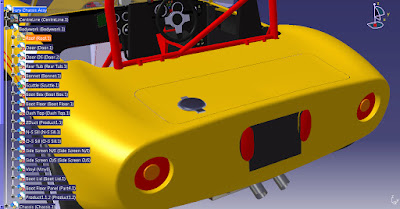 Also with an eye on the next Blatting season, I've replaced the rack mounts with a new type that uses Pip-pins to hold the rack in place. 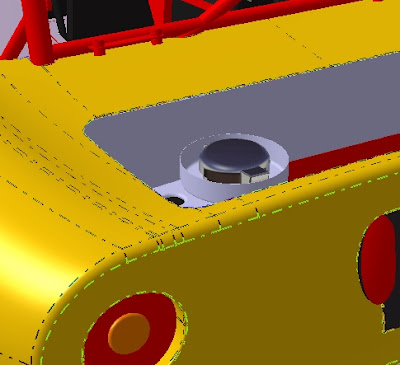 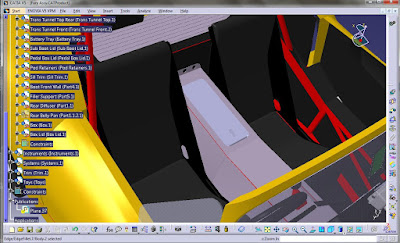 Next on the to-do list is a folded aluminium "glove box" which will fit in the top of the transmission tunnel. I have an aircraft trigger latch & an aluminium hinge, so the surface will be completely smooth & flush, but will open.
Not very clear, but you can make out the lid between the seats, the hinge will be at the back. 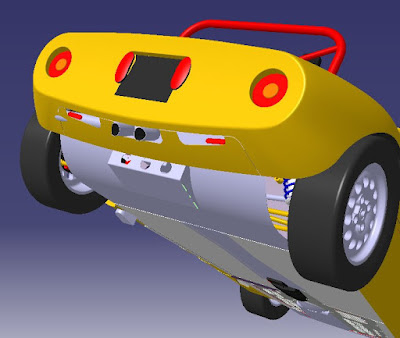 Possibly best (assuming I can get a large sheet of aluminium) is the last of the undertray. The car is flat-floored from the radiator back to the seat bulkhead, the final section will cover the rest of the underside, right back to the rear valance, but immediately behind the differential it'll be stepped to break up the airflow & stop the exhaust fumes being drawn round the back of the car. It's all amateur aerodynamics, but my aero-guessing has been quite effective so far. 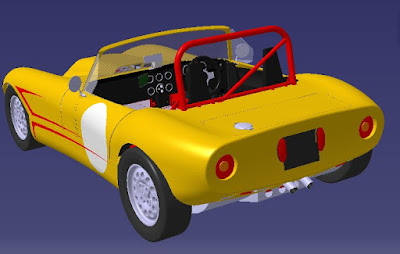 In theory, this will smooth the airflow under the car, but around the centre, the flow will break away into vortices, taking the exhaust fumes with it. Will it work? Well I pop-riveted a section onto the valence & it's stopped the fumy smell I was getting above 70mph, so I'm hopeful

Renderings I've done using the CAD model suggest it won't be too visible from the back either - if you see the car in spring & I've painted the undetray black, you'll know it was too visible.

So that's the plan for this winter - wish me luck!