Fort William lived up to its reputation by raining at the beginning of the day, we sat down to a hearty breakfast (again) & headed out – the rain got harder. Several members of our happy but soggy band dived into petrol stations for cover as did I, but then remembering Fort William’s other reputation (for having a complete change of weather every 15 minutes) I went back out onto the road, aiming for the Great Glen. Sure enough the rain stopped after a couple of minutes. The roads were pretty clear away from Fort William, so I made good progress, but Henry caught up after not very long, then more lights in the mirror indicated the arrival of Duncan & we three drove up to Loch Ness, then up the Five Sisters road, then, as we refuelled police outriders came by shepherding three enormous wind turbine sails. Onto smaller roads making for the Belach Na Ba – Applecross Pass. 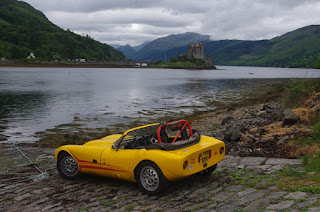 Before that though, a photo stop at Eilean Doonan castle - star of uncounted shortbread boxes, we parked just past it looking back - & while clambering around looking for the best angle, I fell in the brambles. 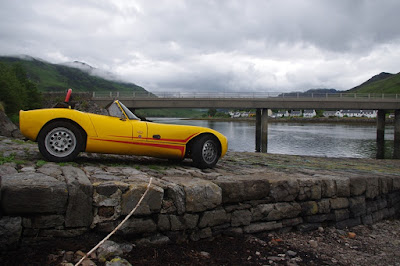 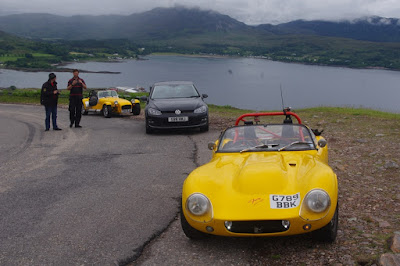 Applecross Pass was every  bit as spectacular as last year, but with more low cloud, two of us reached the top & got out for some photos while waiting, until a garbled radio message suggested that No.3 had already passed us, we weren’t sure how that could be, but we moved on, it later transpired that he wasn’t where he thought he was. By this time we were in need of coffee & possibly lunch, but mile after mile went under the wheels with no sign of refreshment. 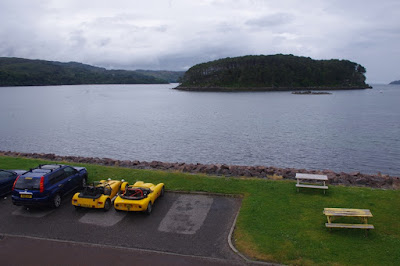 Eventually we drove into Shieldaig, a lovely Lochside village with a very nice small hotel which served a very nice lunch on a very nice veranda overlooking the shore – very nice.
Then back to the route, very good roads around this bit, but very heavy intermittent showers took the endge off the enjoyment – especially as 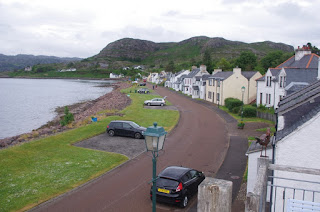 I’d taken my coat of at Shieldaig. There were some odd moments, the vast majority of people moved to let us pass (in accordance with the signs at the side of the road), but one or two refused even to the point of accelerating to close the gap I was about to drive into. No matter – Ullapool was dry & warm & welcoming.


We strolled into town looking for food, last year we’d found a great pub / restaurant, but had had to wait for an hour to get seated, this year was the same. The food however was once again exceptional & one member in particular was overwhelmed by a plate full of langoustines which she took great delight in wrestling to submission & dismembering. It was still almost daylight when we sauntered back to the hotel. 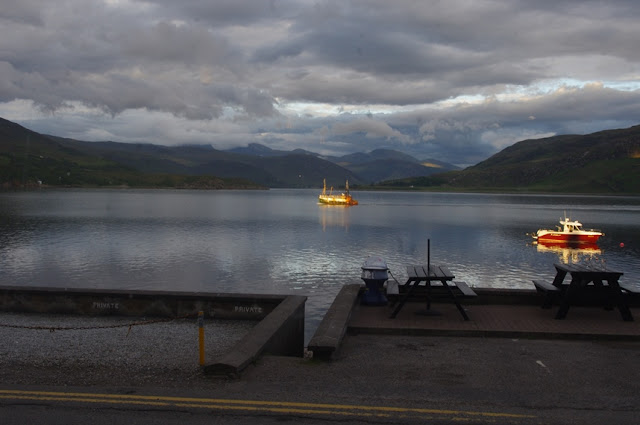