The W.A.G.s Weekend was written around giving the “kit car widows” an insight into why we like these small, impractical, draughty cars, it was softened a bit with a nicer hotel & later starts than are traditional, but that was the plan. On the Friday I got the car out & loaded it, while Mrs Blatter did some last-minute packing, re-packing, deliberating about shoes, un-packing & packing again. Then at about 11:00, most of the group arrived & were treated to coffee, but where was our leader? After ½ an hour or so, a rumbling outside announced their arrival & after a quick loo stop we headed out.
There was only one stop, at a pub near the hotel, so now we were up against the clock. Usually the ETA on the SatNav counts down on A-roads, so we should be there in time for lunch – except that on this journey it didn’t. Towards the end we got separated from the others & arrived at the pub where two of our number – a couple from near Manchester had been waiting for two hours, but they had news! Our leader had broken down causing more delay, but was mended & heading for the hotel direct. 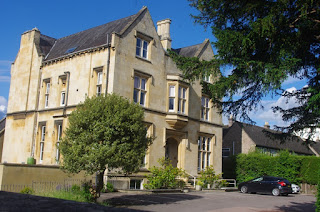 So with only 15 miles to go, two cars headed out of the pub car park watching the skies as it looked a little like rain. As we arrived in Cheltenham the promised rain arrived – in proper biblical fashion. The other car had the roof up as the occupants were sensible, I dived into a space off the road & put the roof up while schoolboys laughed (yes I’m getting wet, but I a minute I’ll be under this roof – you on the other hand, won’t).


So we set off again splashing through the early afternoon traffic & found the hotel in spite of the SatNav’s best efforts. The hotel (The Cotswold Grange) was really good, a detached Georgian place on four floors – we were in the servant’s quarters right up at the top which gave Mrs Blatter a good view over other people’s gardens. As we were unloading the car, the others arrived & after a hot shower & a change of clothes we met up in the bar's garden & exchanged stories of the journey. By this time the sun was shining & we set off on foot for a pre-booked restaurant, as we walked along, the buildings got shabbier & the amount of graffiti increased & with it the feeling of unease, but when we arrived,  the restaurant was really good, the serving & cooking being done by the proprietor, who was clearly enjoying having such a large party in. The food, the service & the company were all excellent & by now Mrs Blatter was settling into the swing of things (phew). 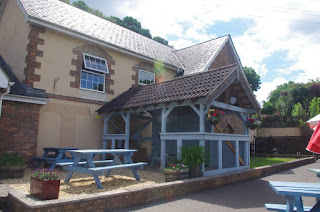 The following day saw the remains of the rain blow through while we were having breakfast & we set off in sunshine heading west making for the Wye Valley. First stop was a pub next to the river, it looked like they were preparing for a wedding reception, but provided us with 12 coffees & we sat outside in the sunshine. Some blokes appeared from the woods opposite & came into the pub, then some more in threes & fours, some on their own, all looking as if they’d tramped a long way. In the end there must’ve been 30 – 40 of them - strangeness.

After more chatting & me going off to take pictures of “The Bridge Over The River Wye” we headed off south, Mrs Blatter & I at the back for photographic reasons, after a few miles the cars came to a halt at the side of the road & the hazard lights came on. I strolled to the front & found that No. 2 car had suffered a suspension collapse. I got the tow rope & jack from the Fury & was able to lash the suspension back together enough to move it off the road, but frustratingly none of the tools we could muster could tighten the nut sufficiently, there was the right spanner in our group – with the one car that was now 20mins down the road. So having made arrangements, there was nothing else we could do & we set off into darkening skies. There was another heavy shower as we saw the screen & roofless car of the spanner-holder going back the other way. Apparently Mrs spanner-holder was wet through to the underwear & had to be provided with dry clothing. 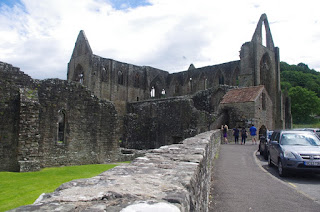 Next stop was Tintern Abbey, a very picturesque ruin on the banks of the Wye, £3 to park, but with £3 off anything you bought in the shop / pub / café, so lunch was puchased & we ate outside. It was while sitting there that we heard that our downed compatriots were mended & back on the road, shortly afterwards we could see the rain coming down the valley like a net curtain, we adjourned indoors & when the sun came out again, set off for the next stop. Chepstow is a nice town, with small streets & a castle, we wandered about in the hope that the others might catch up , but they had made straight for the hotel, then the next heavy shower rolled in & we did the same. 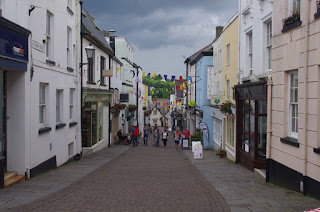 Dinner that evening was provided by the hotel & very good it was too, the wine & conversation flowed & I think we may even have repaired to the bar after pudding - very civilised. 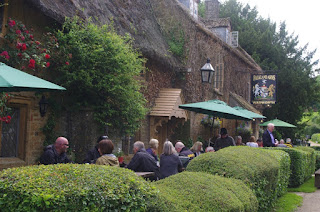 The next day was all about heading home by the prettiest route, so we made our way east zig-zagging between honey-coloured stone-built villages & for once all six cars stayed together more-or-less, though one of our number did stop for an impromptu loo stop 50 yards before a planned loo stop in the picturesque hamlet of Great Tew (much nicer than the neighbouring Mediocre Tew) & it was here that the group started to break up with our northern contingent heading north while we continued east with a plan.


The plan was to meet & have some lunch at Blenheim Palace, it was a good plan, except that someone famous (Elton John possibly??) was performing there that evening, so the place was gridlocked. We managed to assemble to discuss what to do & agreed to try to park up in the town & find food, but even that proved impossible as there was nowhere to park. So we headed home without a proper end to the weekend.


In spite of getting wet a number of times, all the participants said they’d enjoyed the trip, so there’s a good chance of a W.A.G.s Weekend II 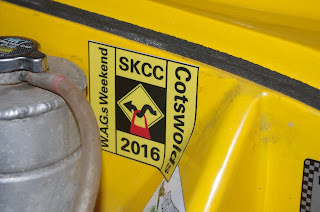