The first proper blatt of the year - that is, the first "turn up in some out of the way place, drive to another place, eat breakfast, drive back" club blatt. There is an even more proper blatt tomorrow over to the east, but with Mrs Blatter away in Tintagel with friends, I'll need tomorrow to tidy the house.

The meet point was Blackbushe airfield, often the finish point & famously "buzzed" by a B52 which thought the small runway & a few outbuildings was the Farnborough air show a few years back. This was the first time I'd seen David T in a while & we each gave a brief presentation on the changes we'd made since last year while waiting for the third must-blatteer to arrive. Andy has a self built Marlin which he's just got back on the road after a lay-up, so unusually we had all built our own cars on this run. 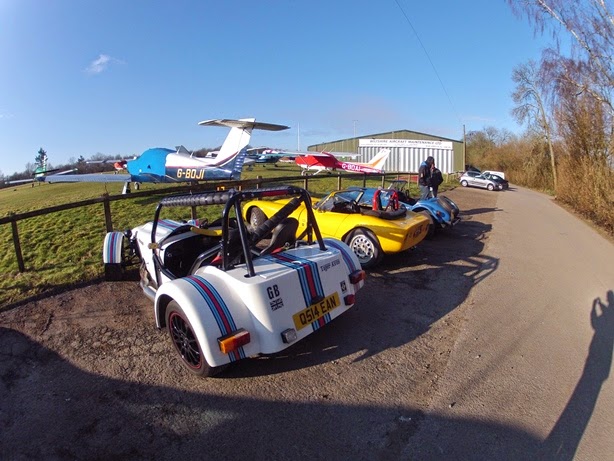 We set off through the back lanes wending north, then west, then south towards our objective, David T admirably performing the role of "pigeon plough" ahead of us, the sun came out, the roads were dry, the horse boxes were clogging up some other road, so we had a fine medium paced blatt. On arrival at our second airfield - Popham, there was some debate about whether the café was open, but again we were in luck, a round of drinks was provided while we waited the 15 mins or so until the kitchen opened. But I only had the GoPro to take pictures with, so the cars look a trifle bent. 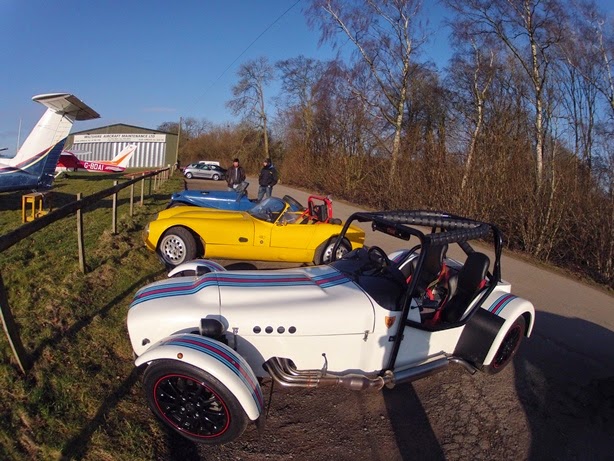 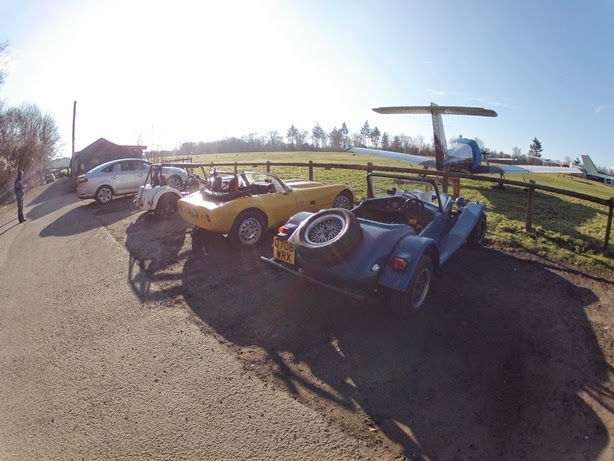 After a somewhat elongated breakfast stop (no-one was in a hurry to get back) we emerged well-fed into the - gloom, while we'd been eating the overcast had rolled in & the temperature seemed to have dropped by five degrees.

The next section was again on good roads & clear (mostly) of traffic, one or two cars even pulled in to let us pass - almost unheard of in the UK. And so at last we found ourselves back at Blackbushe where after a brief chat, we headed home, performing a rather neat Red Arrows style sunburst manoeuvre at the first roundabout as Andy went left, David went right & I went straight on.

When I got home I washed & polished the car ready for the Rallye & then dressed it up a bit to look the part En France. I'm saying nothing more about that until after the rallye (I'm such a tease), but I took it out for a photo shoot & an eastern European gentleman & two escorting women were so impressed, they rushed up to me & asked if he could have his photo taken in it!
Posted by BlatterBeast at 17:01