It's mid September & every blatt could be the last warm(ish) / dry roads / salt free blatt of the year. Best make the most of it then. 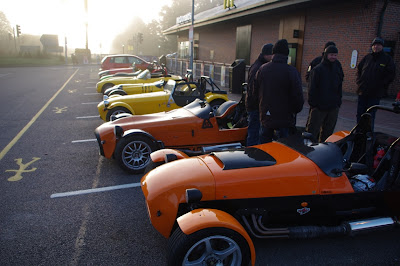 This blatt went from the regular start point of Buck Barn, due west almost to Winchester & back to Buck Barn, the day chosen was part of the Goodwood Revival weekend & we'd be going right past Lord March's door. While we stood about in the car park waiting for the last stragglers, we watched E-types, old Maseratis, even a MkIII Zodiac estate rumble past. Then the last of our No. new member DeanoR1 arrived & was pushed back into a parking space (bike engine - no reverse) & we were ready for the off. 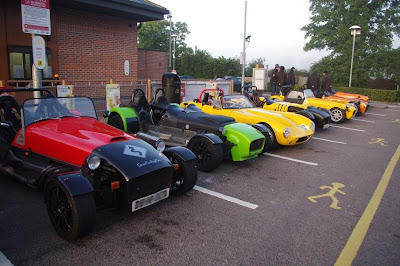 Straight out of the car park & into traffic in the form of a bright red E-type. There is something particularly satisfying about overtaking a red E-type. After that, picking off  the BMW 6-series soft top & Z3 weren't nearly as satisfying. Unfortunately as we got closer to the venue itself, the interesting cars became bunched up & impossible to overtake, so it was a slow ride along the A272 this morning, but soon enough we passed the main gate & picked up the pace a little.
By now it had blossomed into a lovely autumnal morning with the sun streaming through the roadside trees & lighting up the occasional patch of lingering mist. There were some navigational issues as new member DeanoR1 didn't have one, so "Blattiquet" (making sure you can see the following car so they know where you've gone) was the order of the day. On this occasion it didn't work terribly well & at one stage DeanoR1 found himself 1/2 mile up a farm track with no reverse. Hat's off to him though for driving from Southampton to the A22, then back to Winchester on the route & then 1/2 way back again before turning for home in Southampton. 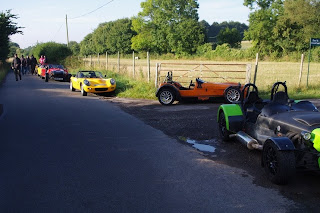 But we all managed to re-group at the side of the road where the lead cars had stopped for water (to spray some into a hedge rather than take some on). After that the pack broke up almost instantly & I drove more or less alone to the breakfast stop. From there MrMango & I (it seems we are now known as the chutney brothers) headed off the route as neither of us had time to go 30 miles east, to come back 30 miles north west again, but before the parting of the ways there were some lovely sweeping bends where my rear camera recorded the following image, which I think is stunning. 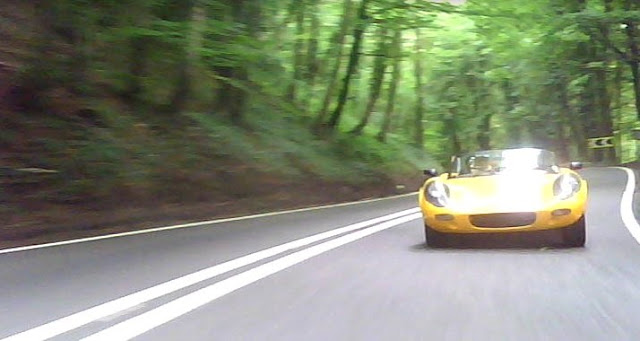 The rest of the video is here:-
Posted by BlatterBeast at 12:12