Listen very carefully, I shall say ziss only once.

The plan was a complex one, "operatives" to set off from various locations around the south east, join up north west of London & proceed to the target fast & low.

As usual on a blatt day I was awake before the alarm went off - today the unearthly hour of 05:30, to make the first meet point at 06:00. Matijs was already in the layby as I rolled up at 05:55. the T.Y.R.E. navigation program we use had suggested the time to the next meet point was 30 mins, I knew we'd do it quicker than that, but I wasn't expecting the 15 mins it actually took us. 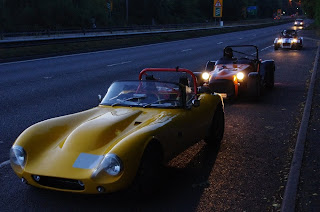 Neither was Matijs & he sailed past the meet point on the ITN (route file on the SatNav) like a man on a mission. After a couple of minutes my phone rang & shortly after that Matijs re-appeared behind me along with David T. David said that Mr Mango would be joining us in Windsor Great Park & Tony B was heading straight for the subsequent meet, so although we were early, sitting in a park was more appealing than the side of a dual carriageway, so we moved on. 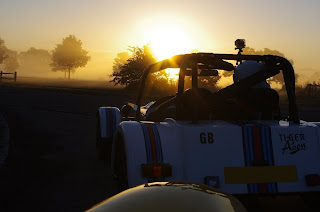 Of course I had no idea where Windsor Great Park was (OK, I guessed it was around Windsor) so Matijs & I drove straight through, stopped when we realised the Martini Tiger was missing, called him, turned round & went back - bit of a theme emerging here.

By the time we got back, the MangoFury had arrived so it was time for a brief photo op. I was pleased with these considering I was holding the camera above my head, aiming it using only The Force. 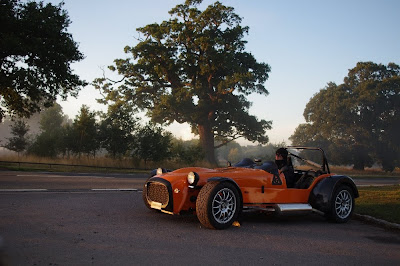 The early morning fog certainly added to the atmosphere Don't you think?

So, off we set again, heading for Hemel Hempstead where we were waved into a carpark by the jovial figure of Nash. After a few minutes the last stragglers rolled in & after a short chat, we headed out - Neil had thoughtfully prepared a quiz for the next part of the route which I failed at in spectacular fashion & by the time we hit Leighton Buzzard I had only registered three villages - the quiz asked for the names of four. The stop here was for breakfast & a café had opened two hours early especially for us.

The café was off an alley off an alley, we needed an ITN just to find it from the car park. But find it we did & after a healthy full English we were ready for anything. 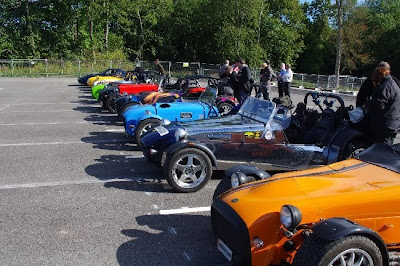 For the last leg the two Furys took their own path as is often the way, but the ITN final destination must've been a post code, because we found ourselves in a housing estate. We knew we were close by the street names "Turing Close" & "Colossus Way" were clues, so making our way round the block we soon found the brown signs & followed them in.

We were met by a very friendly chap who escorted us up to the main house - by now bathed in sunshine) where the payment for admission seemed to throw the staff into some confusion, but after a few minutes we were all sorted & making our way to a classroom hut. 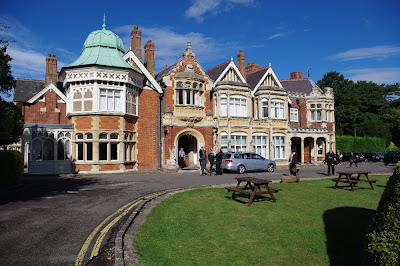 Here a very knowledgeable chap gave us the history & some of the amazing facts & figures behind the place, like there were 9000 folks based there involved in code breaking, most were billeted out in nearby towns & bussed in each day - that's an awful lot of folk to keep the secret of "Station X". There were times when the German secret messages were read by the British war office in London before their intended recipient had seen them, then the subterfuge to ensure that the Germans didn't suspect the codes had been broken - like sending a reconnaissance plane over a convoy - close enough to get shot at, so the subsequent attack would be blamed on the recce plane discovering the ships, rather than knowing where it was all the time.
Having had the talk, we wandered the grounds huts & displays, we were fortunate to have chosen the annual re-union day, so the place was awash with people who in other circumstances I might be tempted to refer to as "biddies", but who were the people who worked long hours in cold damp sheds trying to make sense of random letters, never knowing if that difficult one they were struggling with would turn out to be Hitler ordering a new attack, of Fritz ordering a new box of pencils. It was a privilege to walk the same paths as them.

We also got to see one of the early code breaking machines running, this was the "bombe", an electro-mechanical marvel which has been painstakingly re-built for the museum. 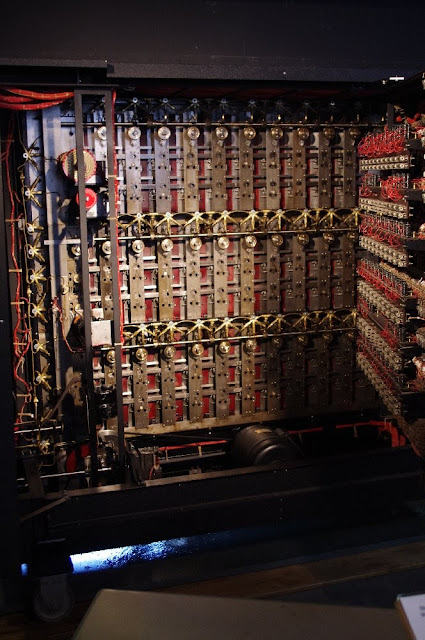 But with dark clouds gathering, it was time to make a move & the two Furys & the Tiger headed out as the first drops of rain were starting to fall.

For the homeward leg I'd planned an ITN to take me down the A404, but as is often the case, Mr Mango had a better plan & led us down some cracking roads, but after a while there was an absence of white in my mirror, slowing down in line with the rules of "blattiquette" led to a slowing of the Mangofury & we rolled to a halt. After a couple of minutes, the Tiger appeared with a tale of woe - the upper alternator bracket had failed, but fortunately the lower bracket was holding it in place against the belt, but it looked like straight roads & constant speed were the best option & David T dropped out of formation & headed back the quick way.

So the two Furys again took to the back lanes & skirted the rain, by the sound of it, we were the only two to remain dry. I was treated to coffee & cake at the Mango house before departing for home.

Another great day out with the SKCC & my thanks go to Nash who organised it all.
Posted by BlatterBeast at 11:00