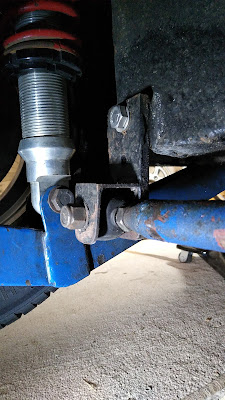 I've done 550 miles in the re-born Stylus & it's now pretty good. The ride is good, though I think the tyres are still a little hard, the handling is very good indeed, but will benefit from the tweaking of the geometry set-up booked for the 6th April & the panhard rod bracket hits the ground. This is an odd thing, the bracket itself does not look like a Jeremy Phillips item, he did more elegant engineering than this & the panhard rod itself slopes up to the axle bracket, so the chassis bracket is obviously too low. I can modify it by cutting off the angle, re-drilling the hole, re-welding the angle to suit & cutting off the excess, that should make the panhard rod horizontal at rest & make sure the bump stops work before the panhard rod bracket hits the road.

But apart from all that potential fettling, it's been to my brothers where we finished bleeding the brakes, it's been to Portsmouth to take my friend John to see his friend John who has a hotrod 32 & a 1940s American pick-up, then today it's been the "The Chalet" cafe & to my old next door nieghbour's house & everywhere it's been it's drawn universally positive comments which is nice. I like it, but I wasn't sure the orange would be to everyone's taste, but so far, not a single doubter 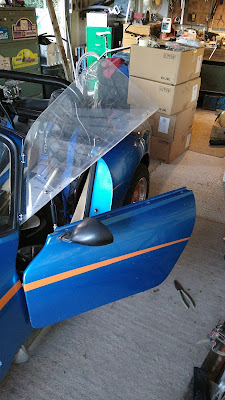 In the garage I've started fitting the "bi-fold doors". The side screens on a Stylus are fixed, I don't like that & on the Fury I'd made an arrangement where the side screens could be swapped for deflectors & they were hinged to the windscreen pillar so they open with the doors, but separate from them. It makes it very easy to swap one for the other which is handy on road trips as the full screens can be fitted with the hood overnight & swapped for deflectors when the hood is stowed in the morning. Work has had to stop however, as the hinges I had weren't up to the job & deflected with the weight of the full size side screens, so beefier lift-off hinges are on their way from internet land.